Things I'd still like to see once Enlisted goes into OBT

This my own list of things I’d like to see in Enlisted after it’s OBT launch, you’re free to disagree with any of my suggestions. It will be a mix of cosmetic, gameplay, and miscellaneous suggestions which may or may not reflect what the majority of the player-base wants.

For the record, I do understand the meta and gameplay of both Darkflow’s CRSED and Enlisted, I usually land 1st-3rd place in every match. So these suggestions aren’t coming from somebody who get’s steamrolled 24/7.

Ideally everyone should read the entire thing before commenting so there’s no confusion.

In the Normandy campaign, the MAS-36 could still be used by Germans, but also a Free French squad with their respective uniforms and Adrian helmets. Lee Enfield, Bren, PIAT, and the Ross Rifle could be unlocked with British and Canadian squads with their own uniforms and Brody helmets. Would also love to see British Paratrooper squads that could have the Sten SMG.

This should work in Enlisted because it utilizes multiple large scale campaigns, rather than smaller historic battles.

HE Shells are incredibly inconsistent right now. I can shoot in between an entire squad of enemies with either light splash damage or nothing. If I place my Tank far away and pick off targets from longer range with HE Shells, there appears to be more splash damage. Perhaps that’s intentional, but this should be adjusted and experimented for OBT.

In both Enlisted and CRSED, you have remain still while throwing a grenade for it to land exactly where it’s intended spot ends. That mechanic is totally fine and reasonable as throwing a grenade in real life while moving wouldn’t be ideal. However, the grenade line function was removed many updates ago and has lead to frustration. I’ve been killed by my own grenades way more often after it was removed, and the lack of proper first-person viewmodels are a significant culprit.

In CRSED and Enlisted, the first-person camera is actually placed at the head of the soldiers in-game player model.

I don’t see the devs implementing unique viewmodels for each soldier within each faction, so they either need to rework the grenade priming animation so that you have a better idea of where grenades will land, or they should add the throwing line back in but have it taper off after a certain distance. This should (in theory) give infantry an easier time dealing with enemy tanks, while helping prevent players from killing themselves by poorly thrown grenades. If Tanks are going to be significantly more lethal in the future, infantry need better ways to combat them with explosion devices. 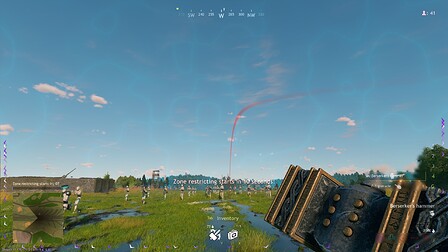 I was over the fucking moon with the last big update which fixed the AI from killing you through foliage and long distances, kudos to the devs on that one. Currently the AI still have too many issues with pathfinding and other logic. AI still need to move out of the way so they’re not run over by friendly tanks as well.

I’ve lost numerous squadmates because some asshole can’t move his tank 4 feet out of my soldiers way. AI soldiers also need to react accordingly when a grenade is thrown at them, I’ve watched countless bots get blown up because they’ve run TOWARD live grenades. The bots also need to properly utilize cover instead of standing out in the open.

I can’t offer solid advice on shitty game modes like Conquest, it’s really Domination with vehicles. It has no place in Enlisted, in my opinion. I’ve got every intention to primarily play Invasion and Assault because the rounds are typically more exciting, and the XP payout is much nicer due to the length of those rounds.

The fact that there’s even a server selector in Enlisted and CRSED is ridiculous because it still throws you into matches outside of your chosen regions. I don’t know how else to convey that I refuse to play in matches where my ping is above 150ms, and this is gonna be a bitch when penalties are added for leaving matches. From my experience as an American, North America and Europe servers offer the best experiences and I’d like those to be my go-to.

Many people don’t mind queuing for a match that’ll offer a better experience, myself included. All you need to do is display a prompt stating that multiple selected regions will cut down on queue times. Make good decisions for the game, and the player-base will grow.

Multiple games have been upgraded to servers which run at a constant 60hz after the successful mitigation of several gameplay frustrations, such as being killed while you’re behind cover and kill trading scenarios. It’s not like Gaijin’s short on money, and this would help entice more people to join Enlisted if they know they won’t be killed because of inconsistent network experience. Would love for CRSED to get this treatment as well.

I shouldn’t have to go into detail on this because of how often it’s criticized, but I’m gonna do it anyway. The time-to-kill in Enlisted is designed to be fast, which also emphasizes the hardcore gameplay meta. Personally I’m not too bothered with Premium squads as long as they’re priced fairly after OBT, but they have immediate access to the Vitality perk which disrupts the flow of Enlisted’s gameplay.

Sorry but players who aim correctly and manage constant upper-torso body shots with high damage weapons should be rewarded, and it’s ridiculous how much extra damage Premium soldiers can absorb in a game with an objectively fast TTK.

The Vitality perk should be replaced with one of the newly announced perks from this new Devblog. Rewards, battle tasks, changes in progress and logistics for squads and soldiers

This is one that I and many others feel very passionate about because I’m one of the people out there who get borderline nauseated after playing Enlisted for a few short hours because how fucking narrow the FOV is. Enlisted is entirely first-person, and there are no exceptions to this. I’ve specifically asked the devs to implement an FOV slider for Cuisine Royale (now CRSED), which did happen but it turned out that the FOV was already capped at 90°…

Raising the Field of View is not going to create any significant advantage. At a higher value, objects from far away will appear even smaller. Whereas at a lower value, objects at close distance will appear larger. But the benefit is that this gives more accessibility to players, and helps mitigate nausea and headaches. Ultimately, the FOV cap should be around 115°.

Everyone should be sick of Enlisted & CRSED’s poor climbing mechanics. Are my soldiers bathing in tubs of vaseline trying to fetishize snails or something?

I’m not budging on this one, I fucking hate the trend of using a double-vision effect when you’re suppressed by explosions or gunfire in videogames. Personally I think a tunnel vision effect where your screen darkens would be fine and doesn’t feel completely and utterly infuriating. There’s already strong weapon sway when you’re suppressed which prevents you from landing accurate shots on enemies.

For the record, I haven’t been shot at since I’m not soldier. But a few years back I was in a car accident with my friends and my vision went almost entirely dark for a few moments and did not have any double-vision like you see in Enlisted and CRSED.

Normandy looks way too colorful in my opinion, and doesn’t set the feeling that there’s a large scale war happening. D-Day took place during a heavy storm (Overcast and Fog) so the D-Day Invasion map should have that more often.

Texture editing would also need to be done on a lot of the foliage / grass used in Normandy, lighting adjustments will only go so far.

The UI looks relatively gross and unprofessional right now, War Thunder’s UI doesn’t look that nice but that’s likely a factor of the games old age. I would like to see a professionally designed UI/HUD for Enlisted that still keeps clutter to a minimum, while looking aesthetically pleasing.

That’s all I can think of at the moment. During or after OBT, I’ll likely make another thread similar to this. Feel free to leave your thoughts, but please keep it civil.

Don’t say it/ edit this out it makes you look bad, you don’t know their situation…

I know that when you get hit your aim is bad but I don’t think we have suppresion. Or I missed sth?

I know about explosion but I have never noticed anything happening because of near miss.

There is upgrade for veterancy, so I don’t know if perks prove anything. It may be prepared for future usage.

Flinch when hit is a shit mechanic and should be removed.

Are you saying you don’t flinch when you’re hit? This isn’t QUAKE

In 2020 and now, they’ve had higher player counts then prior years and judging by the amount of, T-72AVs, Harriers and Petens I’ve seen, they successfully monetized they larger player base. I bet the server issue War Thunder has been facing is either a software problem that more money can’t fix or they are locked into a contract with a server provider that can’t provide better servers (Doubt anybody was expecting a growth in players… unless…)

You still don’t know they did, you also didn’t really put the valid points, the only real valid point is war thunder being at the top (IIRC) 50 money makers on steam…
You don’t know that the T-72 harriers or petens actually made them any money, what about development cost,model costs etc…

Gaijin was founded in 2002 and since then, they’ve only increased the volume of projects and the funding for them. Everyone of their titles since War Thunder has had MTX and a stable player base, it would be moronic to assume they haven’t been making good money off of their players.

Don’t reply to me.

Flinch when hit is a shit mechanic and should be removed.

Being stunlocked by SMGs just because someone got lucky is not a fun mechanic. I’m for it with rifles and MGs though.

I know that when you get hit your aim is bad but I don’t think we have suppresion. Or I missed sth?

Both clear after a relatively short period.

IMO they are the ABSOLUTE MINIMUM that are needed for any game that claims to be even a little bit realistic about infantry combat.

Removing them would be a massive backward step.

I actually don’t mind a bit weapon sway while concussed. So if you guys were getting an another impression from my post, that’s unintentional.

You mean it’s from explosions or from getting shot?

Let’s remember to keep it civil, I’m gonna be annoyed if jannies come sniffing around here.