Your feedback about last update

So many people camp or even grey zone camp as attackers with their BA, that playing infantry is not fun to me any m

The amount of times I’d spawn and move 10m forward only to be the last guy in my squad because of how quickly the enemy bots pick them off without mine so much as firing back is insane
I can’t get over that
I’d love to attribute it to enemy players, but we all know the majority aren’t that good and can’t rapidly pick off a 9 man squad in under 30 seconds unless they all line up.
Bot accuracy with bolts needs to 100% be addressed or bot damage should be dialed back to pre BA buff so they down instead, but when you switch to them you’re obviously able to use the bolt action at full damage

i have yet to noticed an increase of campers

Hard to belief to me, I am sure I often get on NA servers when I am waiting 1+ minute to find a match (cause I recognize some of the player names). I encounter it in every match! If I still cared I would make a video compilation, but I don’t.

how quickly the enemy bots pick them off

Really? I kill bots just as easily as before, you always had to be quick but you can still kill a full squad of bots with an automatic weapon. It is the old game, kill → break LOS → kill and so on. If you position yourself so that the bots are in a line in front of you, you can just full auto all of them.
I get killed by people sitting in a window across the map and I know the bots well enough to know that they don’t do that.

But hey what do I know, I am a total noob and just started playing

the BA buff is perfect, they used to be some pretty bad guns to be changed ASAP now, they still have rather low dps if compared to other guns, but are way more reliable because of their high damage.

the semi auto buff was also a good deal, making them much more viable to deal with groups, but it made the m1 carbine too weak (at least in normandy) since it’s only good thing was the fast firing and the vg.1-5 is now not worth at all since assaulter has way better smgs

the new smg balance is also a amazing job, the soviet smgs used to be a pain since they had almost the same damage accuracy and were faster to fire, but now the germans got their smgs with some more damage and more accurate than the soviets, wich made them better for the long range

(and i don’t even need to talk abou animations)

I like the amount of free squads given in campaign as well as tanks and Planes.

I like supporting the game by buying well thought out squads.

I don’t like that infantry Carrie’s all objectives. Tanks and Planes need separate objectives that can change the outcome of battle as well.

What not easy to understand is the upgrade process for all squads. Tiers need better, and informative descriptions and explanation.

alright, we know the drill.

yet… all you can select, is torso, legs, hands, helmet and head ( which i’m greatefull for what we have, don’t get me wrong, and i managed to make stuff that i personally like, and tried to recreate historical squads ) problem is as i was saying, is that we don’t… really have options to customize our characters in details. for example, remove the bags on my soldiers that i don’t like, and trench coats do not have smgs and assault pouches… not even mgs ones… and yada yada yada. (/ maybe i am nitpicking as i’m a huge sucker for customization… but still. alot is missing also in terms of options. for example, the germans fighting in stalingrad with camo ( which were rare, but that’s fine ) yet, no normal gray uniforms outside the coat like the normandy assaulter squad.

so i’m a bit disappointed that the customization is still kinda the same.
but for the rest, quite a good update with many positive things. can’t wait for the newest hinted news: 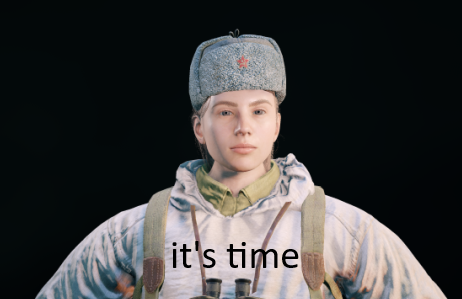 Replays and a Cinematic Mode

it feels like they changed the recoil and sight bounce when you fire feels too CoD now but otherwise, I guess I have no complaints with this patch.

I really feel like a lot of my Premium squads weren’t really worth it.
I feel like they all need some improving to justify the expense.

As examples I will highlight what I think is wrong with my Italian Premium Squads:

8th Bersagliere Regiment: (They need more accurate uniforms) Need to be able to quip weapons in the secondary weapons slot. Right now it is open, but no weapons are allowed to be put there. In particular would be nice to put a shotgun there. Also the squad needs a fifth member who is an engineer. Otherwise, this squad is pointless after you get access to the second assault squad.

3rd Battalion “Tobruk”: (Their uniforms need to be fixed) This squad also needs to be able to put weapons in the secondary slot. It can be limited to specific weapons such as the M1891 or the M1918/Mod30. Perhaps when the trombone gets introduced, that would be allowed as well. It just needs to be available. Also, one or two of them need to be turned into engineers. A premium squad without an engineer is a detriment to your team.

35th Infantry Regiment “Pistoia”: FIX THEIR UNIFORMS!!! This squad also needs access to the secondary weapons slot. Again it can be limited to bolt actions or whatever. they also need bayonets for their Baretta M31’s. Everyone else has bayonets on their rifles. Other than that, this squad is great. The engineer is nice. The semi-auto rifles are nice. I really enjoy artillery as well.

*i pay to play so i expecting it smooth and responsive.

uninstalling, you patched the game and just hours after its overwhelming with cheaters.

but hey! good luck with the models and graphics and stuff.,…

Pacific is not bad. good in some points actually. but there are a few problems with it.

Pacific has a big-sized map. Wide open areas, and far away from each points. Here comes the problem. After the Bolt action Damage increase, Most of the players are camping and sniping far back, even as basic riflemen.

Decreasing the Bolt-Action damage per distance is needed. Bolt Action’s basic damage itself doesn’t matter, but its Damage by Distance should be nerfed. it would make users to camp and snipe less, and move more forward for the objective.

like:
-the at rifles are actually capable of dealing with tanks in pacific
-finally a new axis that is not germany (even tunisia has more germans than italians)
-swords and bayonet/sword charges
-bayonets on smgs

dislike
-costomization still costs too much of a extremely rare resource
-japanese smgs are way worse than american smgs, the have much less damage and fire way slower (except the mp 28, that one seems good due to the ammo capacity)

Ka chi no mg for protection, no commander hatch

M13 is useless as an SPAA now thanks gaijin!

A LOT of operation timed out, impossible to connect to servers, conection refused, lagging and more error messages

For the Pacific Campaign and first hotfix:

What I like:
-For the first time, I can play this game simultaneously with my sister playing League of Legends TfT. In the past, the person who got on later would have such lag that the game would be unplayable or we would disconnect entirely. Overall, connection has been so much better!
-Pacific Theater: so often games emphasize Europe and neglect Tunisia and the Pacific. I love to see this theater as part of the game, it is a particularly interesting theater to me, hoping for China down the road.
-Landings that make sense! I like that in this game; seaplanes, land-based aircraft, and carrier aircraft are mechanically required to land on and take off from appropriate surfaces. It makes so much more sense than War Thunder. Unless I misunderstand.

What I don’t like:
-No F4F? I mean, technically F4P is part of the series (I think?), but no 6x .50 cals? I was looking forward to that. Not that I don’t understand or appreciate how absolutely devastating that could potentially be for balance, especially with tanks that have far less armor than Normandy. Still, I hope a proper F4F-3, if not F4F-4 is being considered.
-Katana as an event drop weapon only? You can’t be oblivious to the fact that it is one of the more exciting features players have been looking forward to. Not only is it only available to people that watch some Twitch stream (which not all of us are into, some of us would rather actually play), but if I understand correctly it is still random even for those that do enjoy it. That just seems plain rude. Almost as rude as charging for every single decal.
-LVT appears to have some terrain interaction bugs? This doubles as “not easy to understand” as I am not sure if the jittering is intended, but I doubt it. Certainly some of the areas I have become stuck make no logical sense.

What is not easy to understand:
-There are plenty of things I am still learning about the game in general not specific to this update, I will omit them due to relevance and eventually make a separate thread.
-Is charging bugged, or is there a specific way you have to hit the keys so your soldier actually charges instead of bugging out weirdly?
-LVT appears to have some terrain interaction bugs? This doubles as “dislike” as I am not sure if the jittering is intended, but I doubt it. Certainly some of the areas I have become stuck make no logical sense.

Ka-Chi He and lack of mg, maneuverability is beyond awful, not sure what it was like in real life. (Might YouTube it), can you let it drop its pontoons maybe, for slight acceleration boost.

Both LVT and Ka Chi in water aiming reticle seems to bounce and that makes it hard to use either.

When mounting LMG in pill box thing on trenches, it deploys below eye line.

Some maps, can have enemy firing down with AA at such an angle they can spawncamp, not fun.

PTRS is only placeholder.what weapon will it be?

Facts. And they just keep adding more Germans. It sucks.

One dislike I forgot: carrier AA is pretty rough when it comes to air battles. Way too easy to just escape a battle that isn’t going your way, the other party has maybe a few seconds to shoot you down or you are home free. AA is also very strong, as advertised. I have been on the benefiting end but this is as a seaplane, I am really not looking forward to trying fighters.

obviously moving them back isn’t great either, as it feels like a fair bit of time is required already just to return. I would prefer an AA nerf to solve this.

I have not played River Crossing as yet, is it high up in rotation? Can’t feedback anything on it, except what I played myself in a custom game against AI.

Ha Go gunner / commander gun does not track with binoculars, as he is not commander technically…