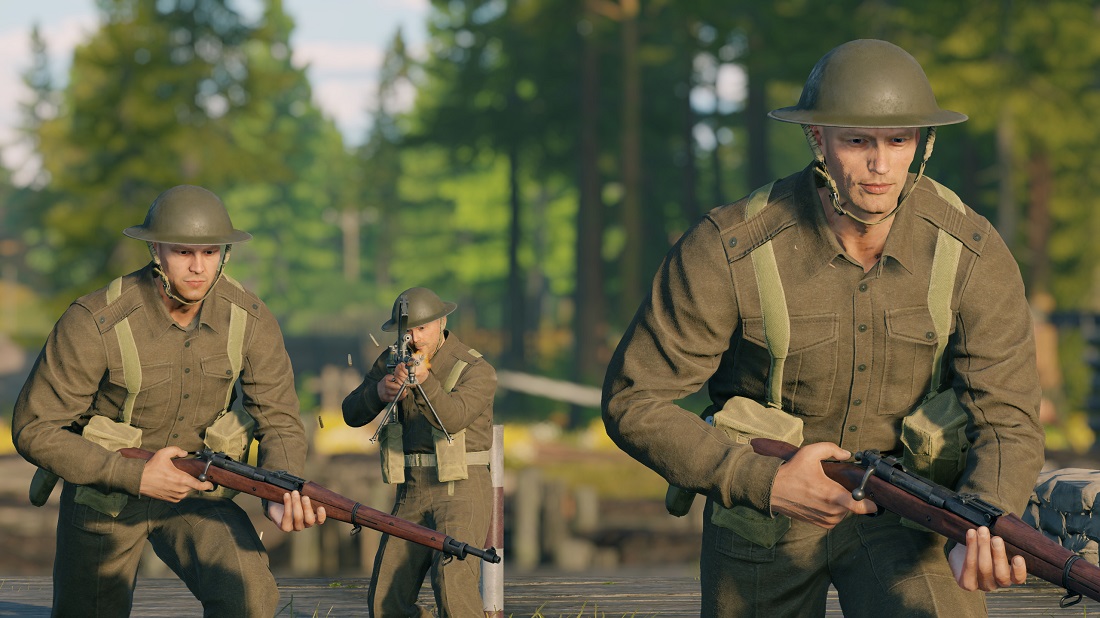 We are continuing to make Enlisted better based on your feedback. In this episode, the whole game mode will become much more comfortable thanks to the tough battle against team-killers and the addition of several long-awaited missions. Also - remember how recently we discussed the low effectiveness of pistols? The solution has arrived!

TRAITORS GET NO MERCY HERE!

We bet you can guess what they did to traitors during the war, after all, we’re playing a game about war. Those players who entertained themselves by team-killing face a number of unpleasant surprises from now on.

Now all their troubles will not be limited by a simple kick from the session. The Teamkilling Counter will run for the entire mode, and severe punishment will completely ban access to Lone Fighters mode. The first bans will not be lengthy, but with repeated violations they will increase up to several months.

The kicking from a session mechanism also becomes significantly harsher and reduces the amount of sabotage that will be allowed.

THE GAMEPLAY TO KEEP TRAITORS AWAY

While the new punishment system is strict, we definitely don’t want it to come into effect too often. That’s why we’ve made a few improvements that will also help make team-killing less beneficial for further treacherous combat:

Since the new weapon upgrade mechanics were introduced, you can purchase pistols open-handedly. After discussing their effectiveness with you, we have implemented several important changes for these weapons.

Pistols and revolvers are now better controlled. The rounds for these weapons do not demonstrate much damage, so the average opponent will need several hits to down them. Now it’s much easier to make groups of holes.

The ammo in your main weapon tends to run out at the most unexpected moment, when enemies are all around. Now it takes only half a second to switch and aim, 20% faster than before and leaves no chance for the enemy to reload a normal weapon.

Now the total ammo will be within 48 to 52 rounds, which is considerably more than before and makes the pistol not even an additional weapon, but the second main weapon that can be used to equip any tanker, for example.

Now the self-defense weapon plays an important role at the front line!

So the revolvers are still as weak as a tomato soup…

Still can’t select only invasion or assault or conquest batles in normal queue.

in the future will sanctions be applied to players who abandon matches?

We are discussing the finalization of this part of the game. You can offer reasonable ideas.

Jokes aside, this is a good change in the right direction. Maybe they decided to hold back on damage increase due to the recoil changes and wanted to see the stats coming in from that before overtuning.

Is there any chance we will see working tank hull mgs soon?
Btw thanks for the efforts and the updates

see the stats coming in from that

I think you’ve nailed it. They’re already tracking those for each of us, so that makes a lot of sense.

Sound modification is possible in the future?

Jokes aside, this is a good change in the right direction. Maybe they decided to hold back on damage increase due to the recoil changes and wanted to see the stats coming in from that before overtuning.

I’ll reveal a secret. We’re trying to stick to realistic weapon setups and can’t just increase the damage of pistols individually because submachine guns have the same ammo. Then we will have to increase the damage to them too, and we are still working on the balance of weapons and SMGs are showing themselves quite well.

Let’s keep looking at the pistols. We will continue to monitor all weapons.

Sound modification is possible in the future?

I’ll reveal a secret. We’re trying to stick to realistic weapon setups and can’t just increase the damage of pistols individually because submachine guns have the same ammo. Then we will have to increase the damage to them too, and we are still working on the balance of weapons and SMGs are showing themselves quite well.

I don’t want to be rude but…
Why semi auto rof nerf then? And MG nest zoom removal? Are they only temporary solutions or exceptions?

All good changes imo besides one:

Switching time for pistols has been reduced by 20%.

I think that such things like reloading switching the weapons etc. are too fast already, always perfect and almost machine-like. They should be slowed down a bit, not made even faster. Also, there is already perk for faster changing of the weapon, so how fast will it be now with the perk equipped?

@Keofox
What do you think about the possibility to use pistols as true self defence weapon when we are in the downed state? We already have the possibility to drop grenades, so how about giving us the option to defend ourself without getting us killed in the process? Imo that would be great addition.

Why semi auto rof nerf then? And MG nest zoom removal? Are they only temporary solutions or exceptions?

The lack of zoom on the MG nests is just painful for our eyes and completely without any logic. Why didn’t you just take countless suggestions about MG nestes that we are giving you since CBT (proper models, proper mounts instead of random MG floating above the sandbags, need to reload, need to change the barrel, maybe even making them crew serwed weapon with gunner and loader required). Those would lower their effectivenes in logical, realistic way and would provide interesting mechanics at the same time.

Reload Time is long as before? then you are Death when you choose Revolver…

No Big Change, No VERY good Change… Update is Meh

Read Suggestions… Change Players Wishes who Pay for Game, not for Babys who can’t defend theirself in CUSTOM-LoneFighter

I think it was also in part, because of the guys who complained saying “bolt action rifles are obsolete next to semi-automatic rifles”.

I don’t care if semis deserved nerf or not.
I only don’t understand why their rof was artificially reduced. It doesn’t make any sense unlike increasing recoil.

well I didn’t like the nerf either, I think they also wanted to make it more “realistic” since the m1garand has 50RPM, but we were lucky that at least they left it at 200RPM
Were they pious?

Proper way to “reduce their rof” would be to increase recoil.

I don’t want to be rude but…
Why semi auto rof nerf then? And MG nest zoom removal? Are they only temporary solutions or exceptions?

ROF changed because it makes semi-automatic rifles closer to reality. Like, for example, increasing the spread of PP and machine guns, which we did not so long ago.

Removing the zoom from engineering machine guns is a balance change.