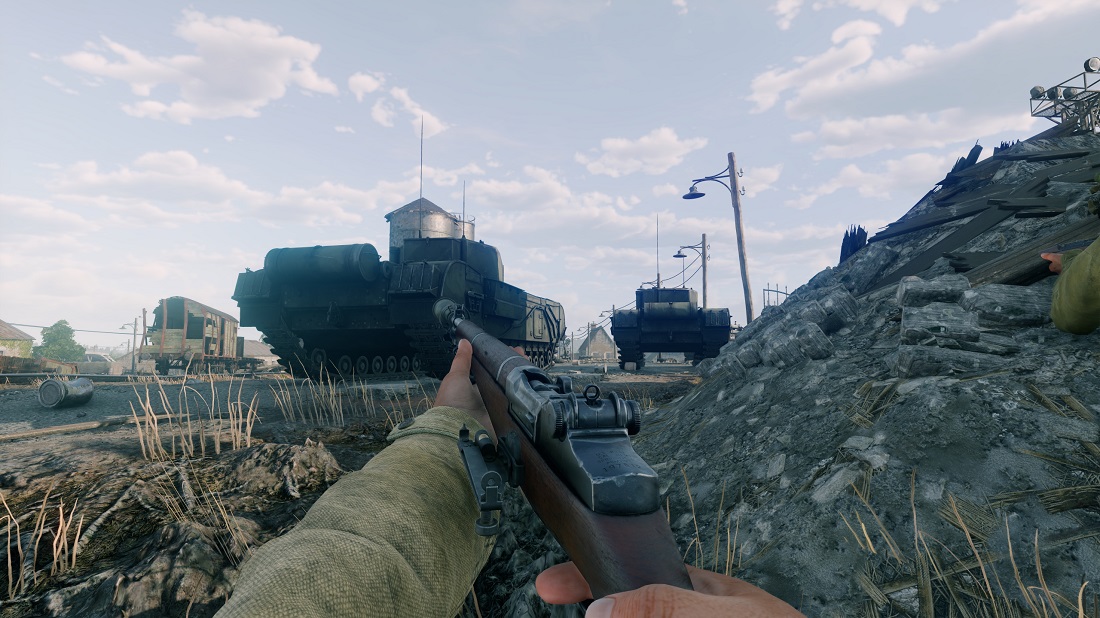 The sounds of explosions and flying bullets are completely familiar to any battle hardened soldier. But there is one sound that is impossible to get used to - the roar of the enemy’s tank engine.

The new episode of our series focuses on improving armored vehicles!

CAN GO IT ALONE

Tough, but not unbreakable. There are times when your vehicle gets damaged, making it difficult to continue fighting. The only solution is to leave the tank to repair it outside. But until today, the whole crew would leave the vehicle at once - much to the pleasure of enemy snipers.

We’ve worked on improving such mechanics, and now pressing the binding button only you will exit the tank, while the rest of the AI crew will remain - waiting for their commander’s return under the cover of thick armor.

Among the many Enlisted tankers, there are very few who manage to survive long enough to use their entire ammo supply. When these brave tankers ran out of ammo, they had to abandon their combat-ready vehicle! What a waste of a good tank…

We respect you, so instead of punishing you - we’ll add resupply points to the map! Similar to the mid-air resupply points currently available for pilots. These resupplying stations will be placed around friendly respawn points. Leave the battlefield for a few minutes and come back fully armed!

This improvement has several purposes: to protect you from the annoying attention of enemy tank hunters who get too close to your respawn point, as well as diversify your combat experience by letting you choose from several respawn points.

So, we’ve added additional respawn points in many missions for all campaigns!

Another improvement you asked for. Armored vehicles will have a brief invulnerability period after spawning in, both to give you time to navigate through the combat environment and to slow down the enemy’s enthusiasm for snooping on your vehicles as soon as they spawn. The mechanism is similar to the invulnerability period granted to newly spawned soldiers.

When is the shotgun nerf going to be reverted ?

Because it has been quite some time since it and the double barrel shotguns especially is useless.

its good that vehicles gets different spawn point option so people cant predict where they will come from. And the ammo supply is a god sent. Perhaps an timer on that ammo supply to or make it so they have to travel some distance to add up so it doesnt become an spam show for the tanks

AT in Normandy sucks, at least they should be able to build Pak40. Pak38 cannot pen anything considering there’s more poweful tanks in Normandy than Berlin it’s ridicoulous

We respect you, so instead of punishing you - we’ll add resupply points to the map! Similar to the mid-air resupply points currently available for pilots. These resupplying stations will be placed around friendly respawn points. Leave the battlefield for a few minutes and come back fully armed

I have a feeling this is unlimited which only promotes gray zone camping.

I like it, I like it, good job, but, when they fix the AP mines bug, people step on them and they don’t die.

Great job @Keofox. All of those improvements are really welcome.

Suggestion for the next MEaBP - shotguns. Just search it up how many topics were already created about them since they got nerfed after Berlin CBT. They definetely deserve more love from the devs.

Thanks for the update and hopefully we will see you next week with more good news.

Thats what i was about to say

Only concern is grey zoners, but a good CAS sorts that, at least when I’m on.

There were a number of things mentioned in previous updates, moveable AT, tail gunners, are they still WIP?

Keep up the good work!

@Keofox I totally understand that suggestions need to be “trending” to get the dev attention, it work like some kind of filter.

But reassure me, all the bug report are read wathever the “likes”?

When is the shotgun nerf going to be reverted ?

We will have news about them. In future.

Keofox what about pistols ? some pistols cost 3 silver which is too high