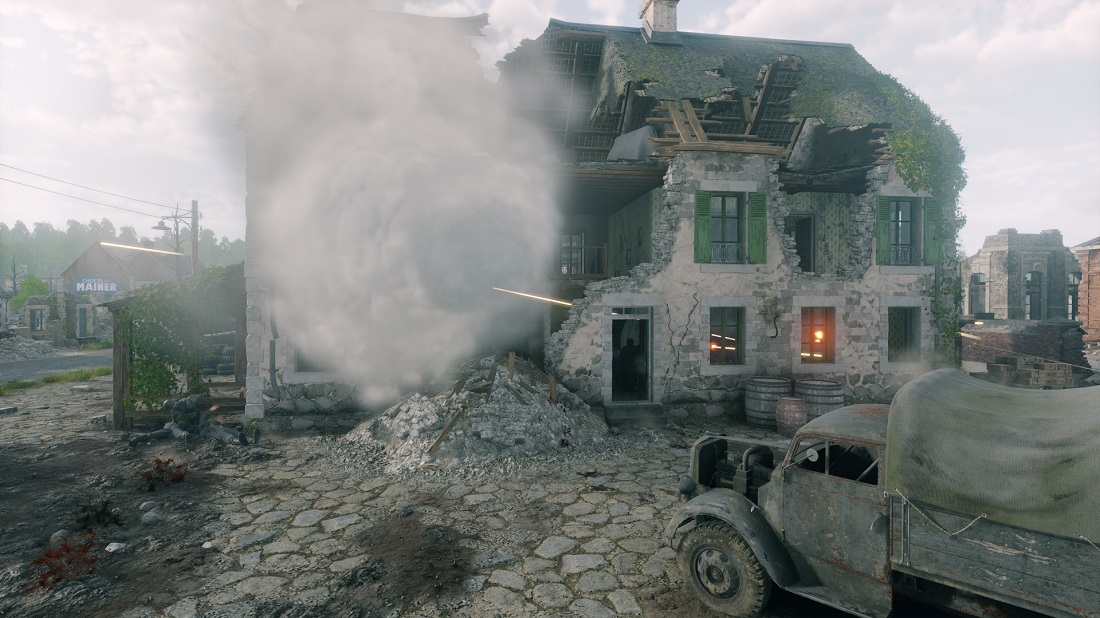 In each Enlisted campaign there are missions with open spaces, easily controlled by the enemy. And those open spaces are usually the shortest paths to your objectives.

Enemy tanks, snipers or machine gunners… all enemies are left helpless if your position is concealed by the smokescreen. Especially now that smoke grenades are even more effective.

We’ve increased the effective time of the smokescreen from 20 to 30 seconds. Those ten extra seconds are sure to save your life numerous times throughout the battles.

Smoke grenades used to take their time to light up and fill the area with smoke. Not anymore: we’ve significantly increased the speed of those early phases of smoke grenades’ effect. Now they can keep up with the speed of battles in Enlisted.

After all, you need to cross the dangerous terrain right now — so, onwards!

It’s the time you can take to step away from the battle. It was limited to 2 minutes before, and that wasn’t enough for some small emergencies at home. We’ve heard from you and have increased the time to 3 minutes.

Just don’t forget to give it your all as soon as you get back! Your comrades depend on you.

Our team regularly checks the most important forum topic for your feedback and reports back to the dev team when we notice issues with gameplay mechanics and ideas for improving the game. We watch our communities and other Enlisted sites so that one day you’ll see your idea in the update notes or in this weekly series.

we need Systematic improvement of all kind explosives mmediately！it had used lots of time!
and Video recording and follow-up function！Easier reporting of problems and criminals！
and easier to hold competitions and make interesting videos

This is good, but please award XP when radio team drops smoke, it is effective but no incentive for people to use it. Same for smoke grenades…

we need Systematic improvement of all kind explosives mmediately！it had used lots of time!
and Video recording and follow-up function！Easier reporting of problems and criminals！
and easier to hold competitions and make interesting videos

This is good, but please award XP when radio team drops smoke

Prevent them from spending a lot of time drinking vodka and changing 100 to - 100 in the last minute in order to make money, so as to prevent them from a one size fits all “optimization method”, such as “diode”!
please！ my god fox！
Teach them what is comprehensive, detailed and systematic optimization！

Is there a server in Asia? The ping is very high connecting to eastern Europe and Europe from players in Asia.

For example, player A calls a normal shelling, and player B does not need to wait for the shelling to end, and can immediately call a smoke shelling. This allows more use of radio smoke.

Any plans about allowing the player to command other soldiers in the squad to throw grenades, instead of being thrown by the player himself?

Bring back the feature about throwing grenade with all squad member?

Once before we can throw grenade with all squad members in the training mode. They can throw in the correct direction to the position marked.

Any plan about bring this feature to the real game?

We are planning tomorrow. And the planned change of explosives.

I guess it’s fine, although I would have liked that maybe they had added a new mechanic, for example, when you throw a Smoke Grenade, if you stay inside it for a long time, your character starts coughing what he does you can’t aim well.

be patient. Every day we make many important improvements, but not everything can be released at once. Some changes require a major update, while others require several weeks of console release.

Enlisted is a huge project and we will not be able to avoid these difficulties. Like any other big game.

Still, I’m very glad you guys are looking into it.

As for this current fix, it’s nice! Smoke grenades are a teamwork tool, I use them extensively!

Only question: Is the 30 from 20 seconds duration also for smoke artillery shells?

Any plans about allowing the player to command other soldiers in the squad to throw grenades, instead of being thrown by the player himself?

I think it is possible to consider adding more functions to the X key? Allows players to flexibly choose the strategy of commanding the squad. For example, Alt+X or long press the X key to pop up options.

More command strategies may better highlight the feature of squads in the Enlisted games, so that squad members are not only quick resurrection times.