I sat down and counted the DPS of various high-level weapons from different countries to see how bad the MP43 has become. And guess what, it’s the worst top weapon. Table: 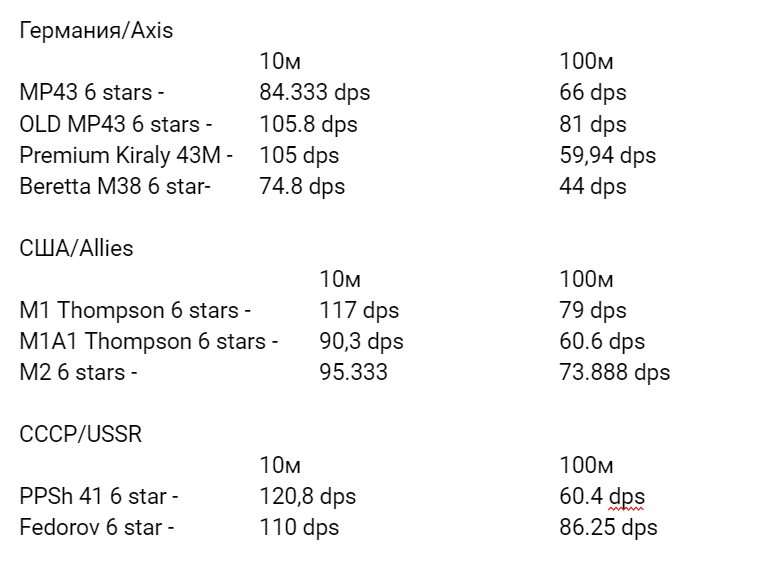 Right now, the MP43 has the worst SMG\AR at 10 meters. All the top guns beat it by almost a factor of 1.5. Absurd.
It’s slightly better at 100 meters, still loses to Thompson, which is supposedly (only good at close range). He is 28% behind Thompson, 35% behind Fedorov. Is that normal? He’s barely ahead of the DPS in terms of dps at 100 meters, by 10% in total, even though the latter is not for long-range combat at all.
I should point out that 100 meters is already too far away for the MP43, most fights with them go up to 50 meters, where the advantage of all other guns over the MP43 is enormous.
And for comparison, I added the old MP43. It suddenly becomes a competitor for the top guns, but is still inferior to ALL at 10 meters, just now not by a factor and a half, and at 100 meters it legitimately beats Thompson a bit, which is still not much, and still loses to Fedorov. He was in an almost perfect position.
Right now, the donated Kiraly is better than the MP43.
Gentlemen developers @1942786 , bring back the old MP43, it was in its place as a competitor to the top PPs, not mediocre crap. Give him back 10% of the damage, 15% of the rate of fire and 10% of the reload speed he lost.

The damage nerf of the mp43 does feel unnecessary. I don’t see a point/reason to it, as it’s counterparts from other factions fare rather well.

There is no reason to whine around here. The Germans don’t deserve good weapons. Good weapons are reserved exclusively for the Russians. Just the way it has to be. Otherwise, the Germans could win even more. The entire German weapons arsenal is still far too good and should be further nerved. And developers plz don´t forget the german underwear. It´s also total over powered.

After a detailed comparison of the statistics, it seems to me that the MP43 used to be in the perfect place. The only thing I would reduce a bit is its huge AR spread (0.7), which is greater than Thompson’s 21\28 in Tunisia (0.68). A figure of 0.45-0.55 would be fair.
I’d even be willing to get a slight increase in return for that (from 27 to 30 points)
It was a strong SMG, and now it’s barely better than the hideous Beretta and the worst of all high-level weapons

To some extend I agree Mp43 shouldnt have bestest dps at cqc as it kind of should be jack of all trades.
But the fact that it even loses at mid-range to SMG’s ( Where it should definitely outgun all smg’s ) makes me wonder did the developers get a phone call from FSB or the dictator himself.

The old MP43 did not have the best DPS at close range. It was exactly as it should have been
In fact, 100 meters is already a long distance in this game. At 40-60 meters (which is more of a medium range) the MP43 is much narrower than any other high level SMG weapon

Yeah, I need to learn to read.

In fact, judging by the numbers, it used to be perfectly tuned because it’s still 15-20% worse than Thompson and PPSh. Now it’s a misunderstanding, not a gun.
Is it safe to shoot with it? Yes. However, I played the MP40 well, too.

And still ppl complain about the MKb, as raw dps is more at the “lower” end. I mentioned as well in the thread below how strong the ppsh-41 is and how you just delete ppl with that smg on long ranges as well that axis get spammed so hard with that in moscow.

Now ppl that complain about the MKb even forget that they have like in the Stalingrad case the GOD like ppsh 41 and on top the AVT 40 which deal full base rifle dmg of 12 (on 6 stars even more) to one tap everyone away with ease.

@6235125 made a video talking about an issue: https://www.youtube.com/watch?v=Muw89zfMB5U and here’s my solution. It’s based on the MKb 42(H) and Stalingrad, but applicable to every campaign and every select fire weapon usable by every class (“select fire weapons” or “SF weapons”): Restrict SF weapons only to classes who unlock them. That would be: Radiooperator II in Moscow (obviously for Soviets only), Engineer II in Normandy, Engineer II and Radiooperator II in Berlin, Engineer II in St…

The Mkb 42 is available to many classes, in addition it has a fantastic spread of 0.15, instead of 0.7 for the MP43.
The Mkb is literally better

Yeah, seeing 8mm kurz deal almost as much damage as 45ACP hurts my soul.
Please buff it. ROF can stay the same, but damage needs to be increased. I’d say 8.5 base and roughly 10max.

How can they destroy the MP43 even worse than the MKb in moscow? Really wonder sometimes how devs stomp things into the ground while other stuff thats humongous OP is untouched.

Also noticed as speaking for Stalingrad that the ppsh outplays you by a lot if you match players of the same skill grade.

It used to be 9.6, and as you can see the DPS was in balance. If you don’t return 15% of the rate of fire, but only the damage, the DPS will still be 20-30% worse than the analogues. Do the math yourself

Thats the spirit ! so true

The MP43 value isn’t in close range dps. If I’m not mistaken, it holds 2 shot capability at 100 meters, and I find that very valuable.It’s the only true automatic weapon that does that. The fg-42 is the only other weapon capable of that, (Accurately) and that thing is in a class of it’s own.

It’s dispersion could be better, but it’s far from underpowered.

I saw no reason to nerf it, but I also don’t care all that much anyway if it’s ever changed back.

, it holds 2 shot capability at 100 meters, and I find that very valuable.It’s the only true automatic weapon that does that

Yet it would make it unique and more viable in different situations. Closer to what it was irl. And if you noticed, the values I gave are a bit higher than they were originally.
DPS isn’t everything.

It really ain’t op. It’s good, but not even as good as the PPD40. It’s best squad comp is 3+2aux troops with the aux troops not even having access to an SF rifle.
And on top of that, the scope is garbage. it has the same magnification as irons, is as small as a regular aperture iron sight and blurrs everything else on top of that.
it’s a decent gun, but not nearly as op as half of what the soviets get. Which is 4PPSh + 1DP/DT + 2AVS.

If you need 2 bullets per kill, not 1, then speed is important.
Fedorov can kill with 1 shot at point-blank range (11.5 damage), and for him the rate of fire is not important. If the MP43 had the same amount of damage, I’d understand.
But I just want his old version. 2 shots from 10 to 100 yards, but a bonus to the rate of fire.
That’s my opinion.

Yeah i meant those other Assault guns in the game which the MKb MP43 and so on is worse in comparison.