We’ve run two testing sessions of the “Invasion to Normandy” campaign, and want to tell you more about improvements that are currently in development thanks to your feedback.

Further development of artificial intelligence remains one of the key goals, and battles in Normandy allowed us to receive new practical experience and feedback from your comments. 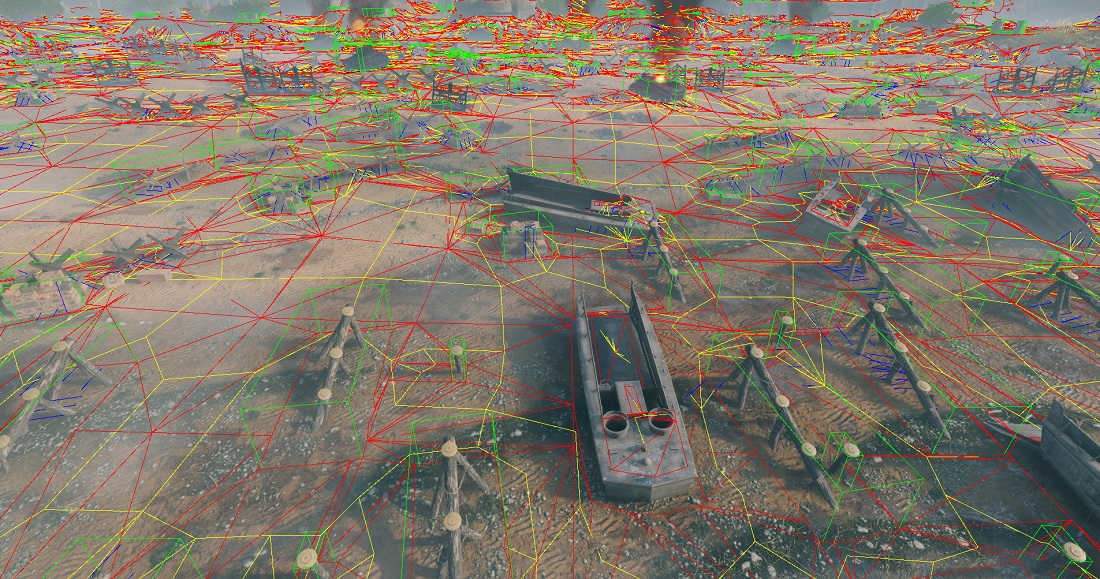 The guiding grid for the AI squad soldiers in the location.

Here are the development priorities for the AI-soldiers:

We would also like to remind you that we are continuing to work on the mechanism of extended commands, where for example, you can choose a squad formation. It will be possible to order the soldiers to gather, or vice versa, to disperse them on a wide front…

For the first time, you were able to ride off-road vehicles at Château du Bosc and appreciated the opportunity to quickly find yourself where before, you would have had to run for a long time to get there.

Nevertheless, work on transport is still ongoing. We will adjust the engine power and refine the physics model to make the vehicles more realistic.

Various vehicles will appear in future in new Enlisted missions and campaigns. 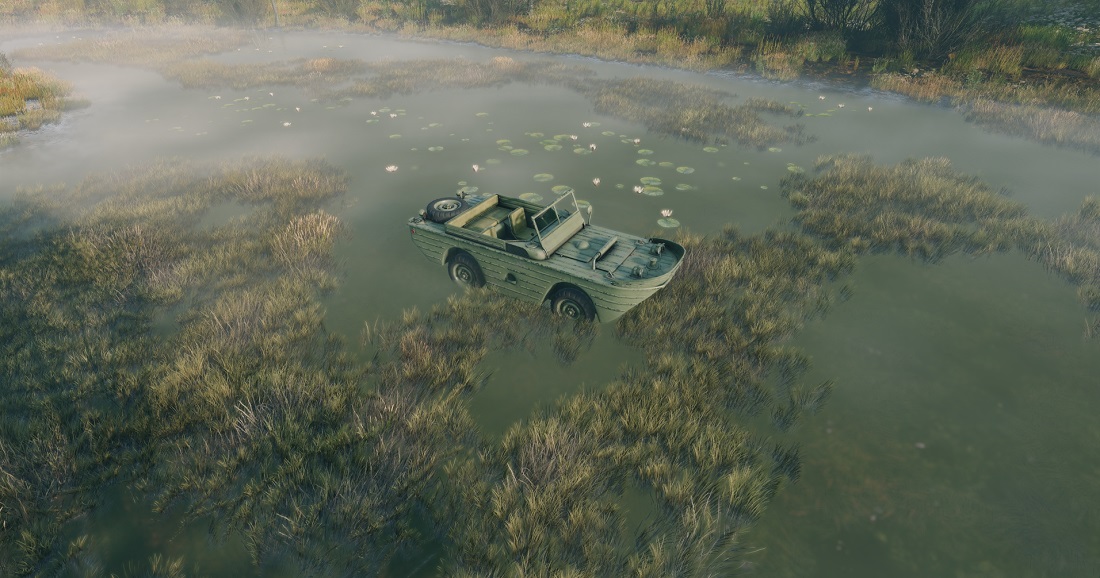 Landing in Normandy began in the early morning of June 6th. On that day, low clouds and fog significantly complicated the difficult task of landing a huge amount of forces. In the Invasion beach mission, most of the participants liked the atmosphere of the battle, but some of the participants wished to see an even darker and more difficult D-Day. 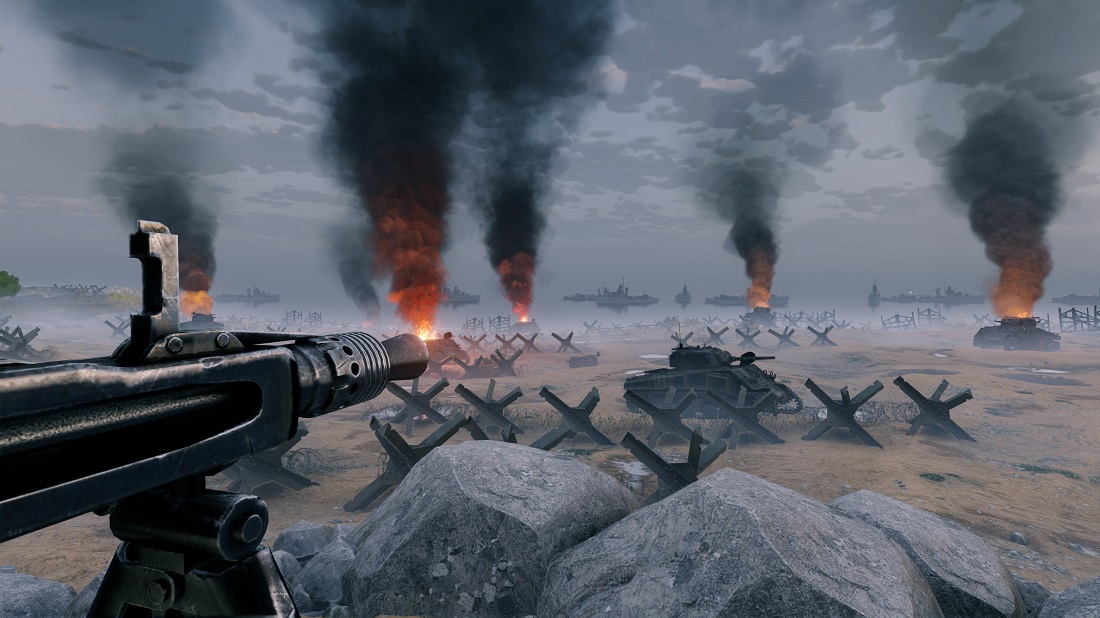 The Enlisted game engine allows us to fine tune weather effects and the time of day, thanks to which we can set the desired atmosphere for you and make even more diverse options for it.

Many more minor details that you discussed in testing are currently in work.

We have also taken into account your comments concerning uniforms and were surprised at your requests to add distance adjustment for the M1 Bazooka and Panzerfaust. This mechanic is already implemented with Page Up and Page Down buttons, but we will consider adding distance adjustment tips in the game interface.

In conclusion. We would like to thank every tester. Even if you didn’t leave any suggestion or feedback, and simply fought on the beach, or in Le Bré or at Château du Bosc, you still left your mark on the heat map of battles that is conducted for each mission. Heat map analysis allows us to improve balance of forces and discover problem areas on the map. 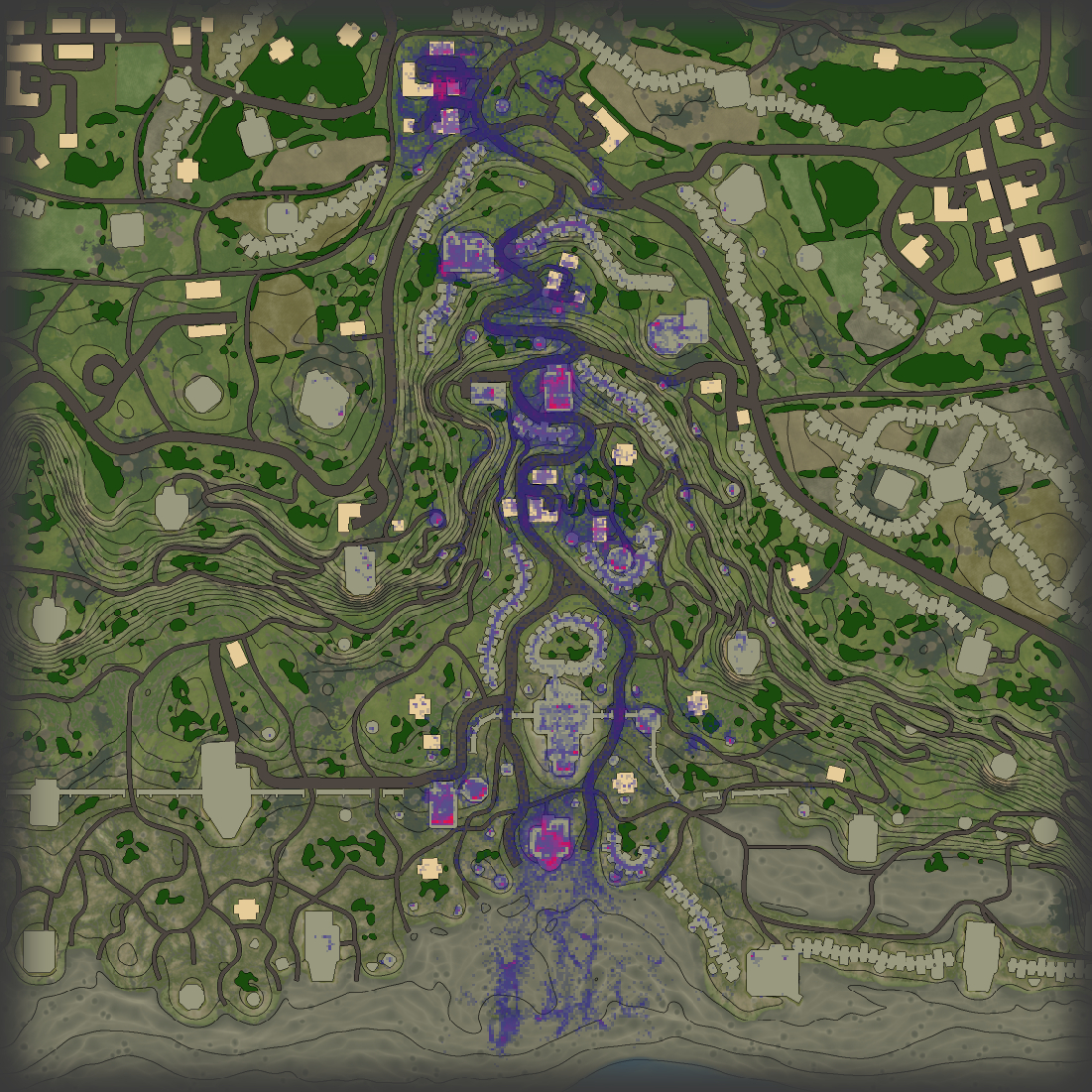 Blue and purple zones indicate the most intensive combat areas.

We are also continuing to work on the other Enlisted missions and campaigns, and we look forward to sharing our achievements with you. Follow the news, fighters!

I love the D-Day map, it’s not small and crappy like maps on Moscow and we can actually play some long range gameplay.

Bit I have some suggestions.

i’ll never get bored to say it, but amazing product. there’s a long way for all of us in this project, but i’m sure we’ll make it.

so far, great job. can’t say anything else than thanks.

really looking foward for the new squad commands, vehicles, and seeing next improvements.
keep up the good work!
best regards^^

Thanks.
We read your messages in this thread.

I like the looks of all these upcoming changes. Could you guys squeeze an increased field of view setting in the next update? I’ve got 3 friends who all bought access the the Enlisted CBT and they all agree the 90 degree cap is way too narrow and uncomfortable.

Thanks for a blogpost; always good to hear there is still work being done and that the team is responding to some community concerns! Maybe once Normandy is done, consider giving Moscow another pass too, that feels like it needs some work.

Everything in this post looks fine, not sure how I feel about the fog though, is that going to make it even harder for defenders? TI get making it darker, most historically accurate and whatnot, whatever honestly, but I feel like you need to address the problem of Attacking being OP on the map. Here’s a quote from a post I made about what I think would fix the problem.

I really think this will be a game changer and is very necessary. Enlisted has such an intuitive building system, yet people rarely even use it because of how fast paced it is. If the defenders even just had a minute to set up, it would be super helpful both for realism, and for game play. This game is meant to be asymmetrical right? Defenders almost always have an advantage, especially on the beaches of Normandy where they were extremely dug in.

Map size too, that’s another big one. Keep up the good work!

Various vehicles will appear in future in new Enlisted missions and campaigns.

Well if this is gonna happen, map should be EXPANDED too for larger use of various vehicles o7

Semi-auto TTK seemed fine to me. A quick group of shots is easier and about as fast as taking your time to aim with a bolt action.

I would like to see Tanks limited to 0 (both sides) until the US forces take the first objective. Tanks are fun, but one HE in the bunker is enough to kill everyone inside, and its just a little bit OP.
The AT cannon is great, but nobody really uses it when i play, and even then its ammo is limited.

Says who ?? rooms are full because it’s easier to rank up and less players . How about listen to the people and the people want 100 real players !

Add small details and hidden weapon mechanics. They help improve the environment and make it more interesting. Some ideas I had were to make the ship guns fire whenever the Americans would call in artillery and add a chance for the player to get M1 thumb while reloading. Also, make the tank roof-mounted machine guns only usable if the commander is sticking his head out of the hatch or if a teammate gets on top and uses it. All in all, still a great game and storming the beach on D-Day while Primo Victoria plays in the background was the most fun I have ever had in a video game

, make the tank roof-mounted machine guns only usable if the commander is sticking his head out of the hatch

I made a suggestion about this a while ago. I don’t why devs made it that way, it looks ugly and unrealistic

Says who ?? rooms are full because it’s easier to rank up and less players

Go play some lone soldier, mate. You’ll notice the ammount of bots there.

How about listen to the people and the people want 100 real players !

I see no other forum thread about this, other than maybe this one:
https://forum.enlisted.net/t/so-devs-will-we-have-100-players-mode/3213
Which has already be debunked.

If you checked my activity, you would know I read every single thread and message on this forum.

How about listen to the people and the people want 100 real players !

I think his sentiment is pretty widespread, check forums or discord. I want 100 reall players as well. That is of course, if the maps get bigger.

Discord is not a place where the developers take feedback from.

If you look at the forums yourself, you’d notice that you two are the only two players that are talking about it, with the aforementioned thread, which I linked as a reply to the other guy, being the only exception to this. But, as I also said to that guy, that thread was more about a news post and got debunked.

The devs never promised us 100 player battles, only 100 soldiers. We can’t even get 25v25 working without AI squads, with most lone soldier battles being 5v5 or even less, with the rest being bot filler. There is no way for 50v50 to ever work in the current state of the game.