Your feedback will always be an integral part of the Enlisted development process! Our previous Dev blog revealed most of the upcoming campaign content for Stalingrad, and we have been monitoring and analyzing your comments and suggestions since our last post. We’ve taken note of your ideas and used them to amend our initial plan. A huge thank you to everyone who left comments to help us make Enlisted better - we’re very grateful for all of you. So! let’s discuss the changes we will implement regarding the content and level structure of Stalingrad: 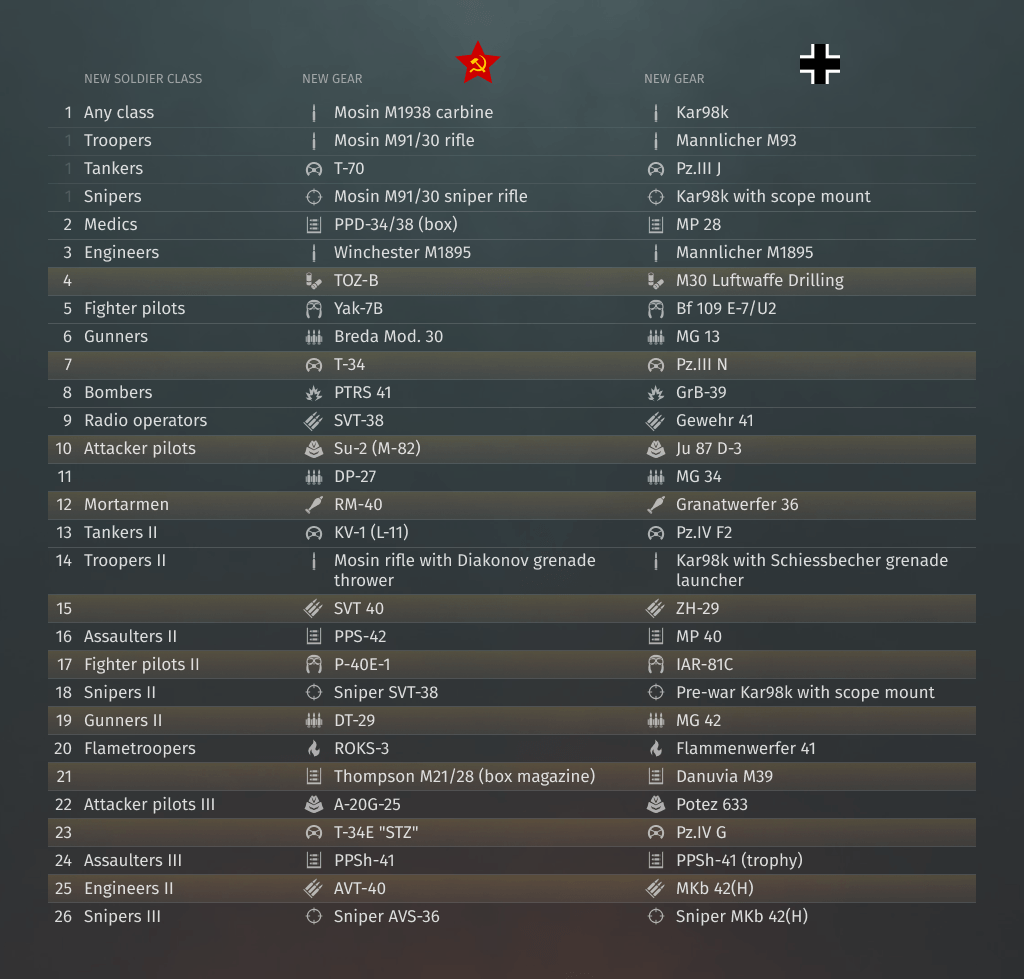 Mkb 42(H) for Engineers and Assaulters

Initially we had planned to allow this rifle to many classes of soldiers, including regular infantry. But many of you expressed caution that this effective, versalite rifle would end up being overused.

Since we also highly favor weapon diversity, we will indeed change the accessibility of the Mkb 42(H) and its counterpart, the ABT-40: Once the campaign is live, these rifles will only be available to the Engineer and Assaulter classes.

Even though we are decreasing the amount of automatic weapons in Stalingrad, we’ve decided to make Level 24 of the Campaign free for everyone. It will feature level III assaulters equipped with the pretty competitive PPSH-41 for all players (for both armies, since trophy weapons were used by Wehrmacht as well).

Even if after reaching this high level, you still aren’t sure about purchasing full access to the campaign, you will still be able to fight hard with these powerful SMGs!

No two closed levels in a row!

We have also changed the structure of levels a bit, now you will get something new every two levels even with the free access mode! As such we have removed parts of the progression line where you could have multiple restricted levels in a row - making it no fun to progress for free players.

37 Likes
Predictions, today or Thursday or more delay?
Trophy PPSH for the germans, but no trophy MP40 for the russians?
Stalingrad campaign levels (but actually good)
Losing trust in Enlisted developers
FG42 and AVS36 need to be heavly limited in class
96666198 March 22, 2022, 11:17am #2

MKB 42 should be an assaulter weapon for sure. It made no sense to allow everyone to have it. The MP43 is for assaulters in Normandy and it only made sense that the MKB follow that thinking. Plus it can now get the proper ammunition amount.

My only issue is the AVT 40 for assaulters. I’ll pick the PPSH over the AVT all day but maybe others like it more than me.

Quick question though. Since the AVT40 is also in Berlin. Will it be restricted to Engineers there as well? or will that remain unchanged?

This is a change for Stalingrad. It will not change in other campaigns.

@1942786 so in the future there will be another mkb for assaulters?

Thanks for taking the community’s input into account! And by the way, one more thing I want to say… we are waiting for the update anyway. I feel like a poodle staring at the food through the glass. Can we expect an update next week?

so in the future there will be another mkb for assaulters?

Sorry? You will receive your first MKB with a detachment of engineers. But from now on, you will be able to issue it to the assault squads.

Do you have any other news today?

@1942786 ah thanks for the explanation, I thought that in the future you would add a version for the assaulter separate from the one for the engineers

Glad you made a move in order to listen to your community, I respect that keo, really.

I definitely like the AVT40, but I agree I won’t put it on assaulters. 1. Kinda boring to use the same weapon all the time. 2. AVT40 is more of a semi-auto rifle that can go automatic if it is really required. (That is at least how I use it anyway)

Hey I’m really glad for the mkb42h! Now I’ll have no shame using it! Thought the Danuvia is really sexy

You even allowed ppsh for free users even if they don’t really deserve it, hopefully they will simmer down a bit

Nice this is a change in the right direction!

2 squads. 1 with PPSH. This will be your squads for the inside buildings, thigh corners fights. 1 with MKB for the more medium ranges.

ppsh41 (urgh) with the german assaulters

You even allowed ppsh for free users, hopefully they will simmer down a bit

I think the comments against stalingrad will disappear now