Now that phosphorus grenade spam is upon us, maybe enabling troopers to carry and equip gas masks could be a thing?

Removes s the gas AoE effect of those grenades, at cost of -50% stamina when worn.

My first thing is that phosphorus gas shouldn’t go through walls as effectively as it does. I could understand a little bit through gaps, but majority of it should stay on one side of the wall.
If that was the case, being able to stack up sandbags to more efficiently keep grenades out would be the better solution. Their aim when throwing grenades would have to be a lot more precise to make the gas grenades worth it, and that’s only if there is still a space to put it through.
Sandbags would need to be a bit more durable for this though.

I digress though, gas masks seem like a possibility to some degree. It could be put in the same slot as perhaps the binoculars, but my only issue there is that it becomes extremely meta to have them equipped, so much so that Phosphorus grenades become essentially pointless to even use. There would need to be more factors for balance.

white phosphorus produces burns, a gas mask would not save you from anything because you would burn to death

but at least your lungs wouldn’t burn 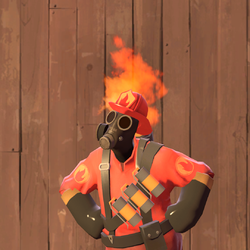 Burn effect would work as it does now, so no issue.

I digress though, gas masks seem like a possibility to some degree. It could be put in the same slot as perhaps the binoculars, but my only issue there is that it becomes extremely meta to have them equipped, so much so that Phosphorus grenades become essentially pointless to even use. There would need to be more factors for balance.

That would depend on the exact functionality of the masks.

In my view, you should have to actively equip + unequip them (no passive effect - we should also have a bot order to equip masks) + you could even restrict the player field of vision somewhat when the mask is on.

Right now in some maps and campaigns there is just a massive amount of gas attack spamming going on, and since you can create pretty huge clouds of that shit by throwing 6 nades in a wide pattern, this thing also needs a counter.

Agreed in general that gas should not spread around through walls, etc.

Thats only if you’re close enough to the center of the blast, otherwise I can see Masks fitting in nicely.

As others said, have it replace the binos slot but have it be a bit more expensive to buy.

Now that phosphorus grenade spam is upon us

Thats because like flame, phosporus no clip the wall and kill you

yeah and a tickle from any fire source will immediately make you combust. The fire circle should fill depending on the intensity of the flames you are near before setting your soldier on fire.

Right now in some maps and campaigns there is just a massive amount of gas attack spamming going on, and since you can create pretty huge clouds of that shit by throwing 6 nades in a wide pattern, this thing also needs a counter.

Do you have specific maps/ locations in mind that you could name? I’m not disagreeing with you, just looking for specific examples.

Kafir cave map in tunisia has probably been the most cancerous experience so far due to the confined spaces at many of the cap points.

However every campaign can be pretty bad, all it takes is just one guy with a heavy nade stockpile and the willingness to use them.

Normandy ruins of vaux (?) has also been bad, as well as many Pacific maps.

Fair enough. I honestly think that the cave village map on Tunisia needs to be removed from rotation as a confrontation map, at least until they rework it, the capture zones, and the AI pathfinding on it.

The other maps I think would benefit most from stronger fortifications and fixing the issue of the gas passing through walls, rather than from just the gas masks.

My biggest concern with the gas masks at this point is that it will completely alter the balance of grenading the objective and pushing the objective. We’ve seen the issues that arise from frag grenades not hurting teammates, could you imagine having a prolonged effect like phosphorus gas that some people can move right through?

In the current state, it does an extremely good job at clearing out infantry in that space, and kind of resetting the fighting space, where one team is no longer dug in, but at the same time, it doesn’t allow the aggressor to move in either. If that feature were negated, with say gas-masks, it would completely topple the balance and cause a lot more problems.

I’m not opposed to it in the future, but I think fortifications buff and reducing the spread through walls needs to come first and see the impact those have first. Then if its still needed, implement gas masks after that.

I was just playing around with this, having 4 troopers in the squad stacked with 3 phosphorus nades each. I think by cycling through the troopers and just throwing nades, I can be incredibly annoying as I can basically blanket all approaches to the cap with a fog of flames and gas.

I think gas mask is much better solution than current situation, as this theoretically gives some freedom of movement to both your side and the enemy side. Current nading just affects the enemy. Plus you still need to watch out for the flames themselves.

Agreed fully on the leaking walls though.

The gas from phosphorus grenades also hurt teammates. However, just like molotovs, the friendly damage caused by them is reduced in comparison to what is done to the enemies.

i would glady make item in The Bincular iten slot.

don,t forguet to add penality in vision has well.