Having been playing since the first Berlin beta, here are some suggestions of what can/should be improved regarding tanks:

1. Tank crosshairs colors
as already pointed out in other threads, red-green-yellow is impossible to distinguish for quite a few people (up to 8% of Norh-European male population), myself included, just let me customize them to colors which I can see;
2. Binoculars/observation devices
would be great to be able to look around the tank as a commander without peeking out or rotating the turret itself (I believe binoculars are available in WT?), those were equipped not only on the likes of Tigers but even BA-11s;
3. Commander freelook
speaking of peeking out, we need a freelook button that would lock the turret rotation and simply let the player look around with the commander’s head without losing turret positioning (e.g. by holding C);
4. Commander pose/animation
furthermore, speaking of commanders peeking out, would be great to have at least some kind of animation for going in and out of the hatch, currently tank commanders can go up and down like it’s a whack a mole game;
related to this, would be great to have the commanders not “standing to attention” with their hands on their sides when peeking out but rather have their hands hold on to something, it just looks silly:

5. Hull MG
the Radio Operator/Machine Gunner in tanks currently does nothing, and the front facing hull MG found on most WW2 tanks is currently unused, and it’s currently impossible to kill/suppress the enemy in front of your tank if the turret is looking elsewhere, would be a great addition if we could press 5 and switch to the hull machine gunner position;
6. Collisions with objects, flickering on terrain and trenches
self explanatory, may be the engine’s limitation, but it is still very annoying to be stuck on trenches, collide with tiny rubble and have your tank flicker in seizure when the surface is a bit bumpy;
7. Separate controls for turret-mounted MG
for tanks with turret-mounted MGs it would be great to be able to grab it as the commander who has peeked out of the hatch and aim it separately from the movement of the turret (within its traverse limitations and being exposed to headshots, on the other hand);
8. AP/smoke grenade launchers
would be great to have such launchers on tanks which had them (e.g. Pz IV, Panther, Tiger - Nahverteidigungswaffe) to fire AP mines up in the air against nearby infantry or smoke grenades for cover;
9. Flickering bug when changing seats
pressing the tank seat key you’re currently occupying causes screen blinking;
10. Stars, crosses, turret numbers
basic tank markings even with random turret numbers (with fancy customization saved for monetization, I get it) would make land vehicles look much more authentic and bring them in line with the airplanes’ decals quality at least; 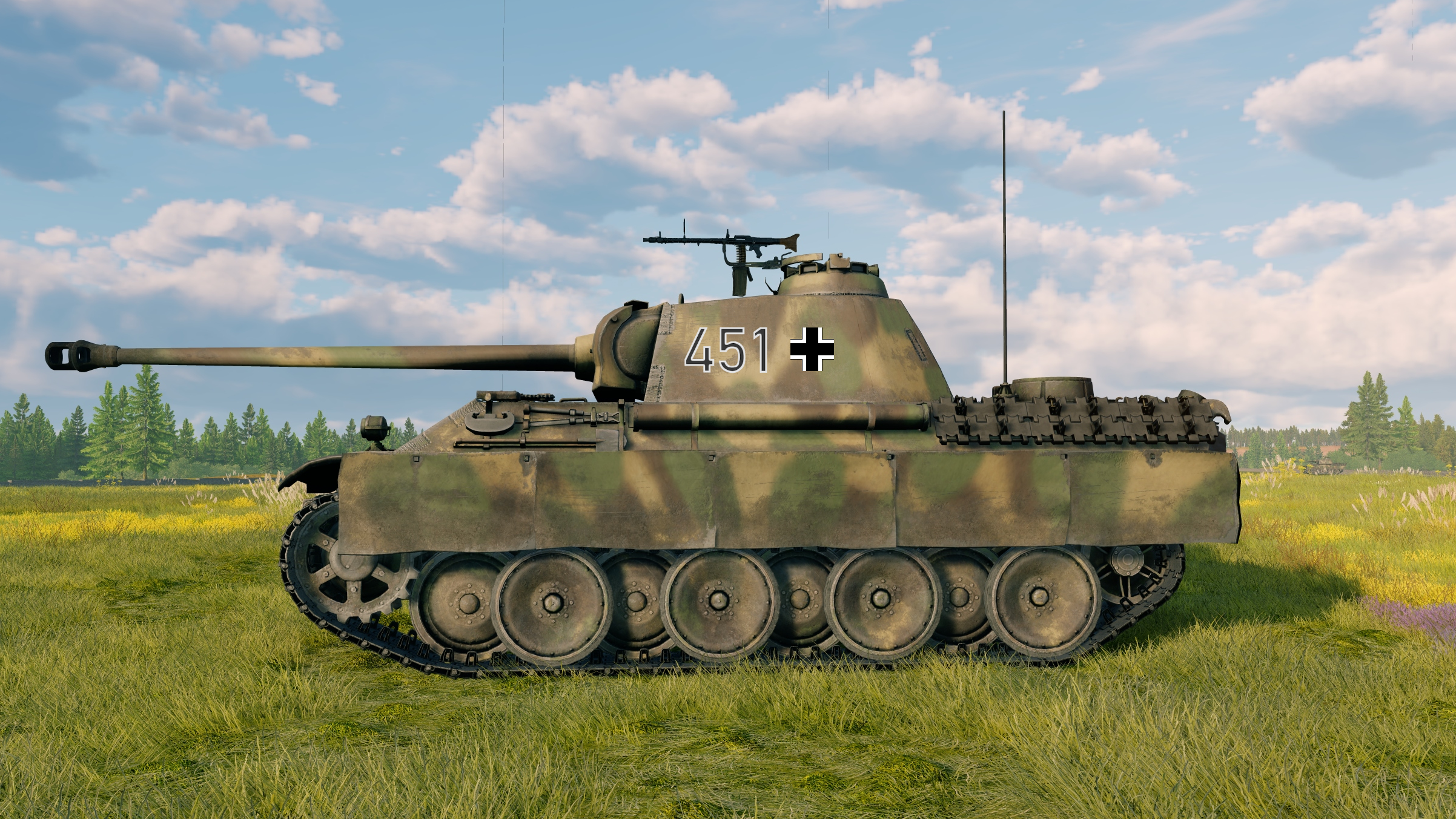 11. UPD Tank resupply stations in Invasion
If tanks can resupply in Conquest and planes can resupply at all times, why not tanks in Invasion?
For balance reasons and not to facilitate grey zone camping we can make the resupply take a while and locate the stations at a far location so that the journey back and forth takes some time, but the stations need to be available at every sector of the attack in Invasion;
12. UPD Tank-specific sights and engine sounds
Goes without saying an armored car like BA-11 shouldn’t sound like a Panther or have the same optical sight.

Disclaimer: I am not looking to make the tanks OP, so everything above that isn’t a bug can be tweaked for balance with numbers of use/cooldown/pros and cons.

If anything of the above is already present in the game and I somehow missed it in the menus, please let me know.
Thanks!

Those are all good suggestions (The only thing I’m not sure are AP mines), so you have my full support about this.

I 100% agree with you, I only disagree with the suggestion of being able to use binoculars even if buttoned up and not exposed.

I think with AP mines he means the fragmentation grenades thrown from the mortar found on german tanks (the Nahverteidigungswaffe) for killing infantry if it’s getting too close.

Yeah, I know.
I just think that tanks should remain vunerable when enemy infantry gets close and giving them such weapon could make them even more powerful than they are now.

Yeah, I know.
I just think that tanks should remain vunerable when enemy infantry gets close and giving them such weapon could make them even more powerful than they are now.

Balance first, of course. Just thought it would be great to have such an option, even if it’s a one-time use only, when the enemy soldier is bunny hopping on top of your tank and obstructing your view (happened to me more than once).
With the grenade launchers such pranksters would have to guess whether I had used my defensive measures or not before dabbing and teabagging on top of my vision ports.

I 100% agree with you, I only disagree with the suggestion of being able to use binoculars even if buttoned up and not exposed.

Balance first, definitely. Maybe make them slow/easily damaged by explosions/reduce their magnification/limit the ability to shoot when using them. Just could be a nice historical feature (and maybe reduce some stress on eyes when pixel hunting for silhouettes in the distance, especially with Berlin lighting).

Well, I was talking more about realism, in my opinion balance in this game is not that big of a deal as many people think since it’s not an arcade game and there are so many factors that can affect the match. The important thing is that there is nothing EXTREMELY powerful or EXTREMELY weak

I agree with all this suggestions but why the hell u did not mention realistic tank sights/optics?
This war thunder cross for tank optics is so unrealistic and its stupid that all tanks from all nations have the same sights/optics… I want to see rotating sights on german tanks with little triangle in the middle like how it was in real life… Look at Heroes and Generals, Red Orchestra, Hell Let Loose, Post scriptum… Why cant we have tank optics like in those games!? Is it so damn hard to make that?

Well, I was talking more about realism

Well from the realism point of view we should definitely have periscopes (i.e. binoculars when buttoned up).

I agree with all this suggestions but why the hell u did not mention realistic tank sights/optics?

Right, that too! I haven’t noticed they all look the same?
However that must be fixable pretty easily with change of textures, I guess.

While we’re at it, one more thing that bugs me is that all tank engines (at least in the menu) sound the same - when you switch between tanks you can clearly hear the sound is the same regardless if it’s Panther or Pz II.

id like to be able to use the smol viewports around the cupola on tanks like sherman and most pz, and they should let one or two members of each squad get binoculars and let u take them from dead soldiers

All of these are fantastic suggestions and would make the tanks themselves (not speaking of balance here) pretty much perfect.

Also those are fantastic ideas

Thank you pointing out, fixed the numeration.

Why do you think the resupply points is a bad idea? During my last Monastery invasion I reached the brigde in my BA-11 having successfully defeated 5 enemy tanks, numerous infantrymen and leading the charge, topping the scoreboard, and I was out of ammo.
Why should I leave my vehicle instead of driving to the furthest point of the sector and resupplying e.g. 50% of my original ammo? Only seems fair - the enemy team gets a breather while I’m away and can prepare AT guns, barricades etc; and I get to be useful for my team again after a round trip to the rear and back.

Simply bc it simplier and easier leaving the tank, you do more xp doing it and free the spot for another player to use the tank.

And the time for supplying the ammo is too much your team will be down 1 or 2 tank for 1 minute at least.

In the end is just a better faster and less “selfish” option like we already have in game.

But just to add you can look around your tank from the inside in different prisma gaps by scrolling. Even the driver can do that in some vehicles. Not sure all. But yeah some binos would be nice. I also wish that your gunner could hold on his own if you want to drive etc. Not as accurate as you but some how ^^ Not sure if it works now havent tried that though but think hes not shooting on his own

when can we get sound custom modification like war thunder?

tbh if you have an AT rifle its very easy to kill an enemy tank, even easier when there isnt any working hull mounted mg’s