Adding to all campaigns!

Squads, weapons, and vehicles! We continue to extend all the Enlisted game campaigns. In this blog, we’ll talk about the new levels and premium squads of Normandy, Berlin, Stalingrad, Moscow and Tunisia.

BATTLE OF TUNISIA: “CAN OPENERS”

Let’s start covering the levels with the large caliber M1 Bazooka for the Allies and the “RPzB. 43 Ofenrohr” for the Italian-German army. They make a big difference! The armored vehicles of Tunisia have long grown to serious and well-armored threats, like the Sherman and PZ.IV, and the means of combating them being long delayed. But now the armor dominance is over — these grenade launchers can be safely used even in a frontal attack. All that’s left to upgrade.

Flametroopers. But not ordinary ones. These soldiers know all the risks of their profession, and they have prepared for the job in a very exciting way — fully compact flamethrowers! The main advantage of these weapons is that they are hard to identify. The enemy will believe to the very last that an ordinary soldier is near. And then — surprise! 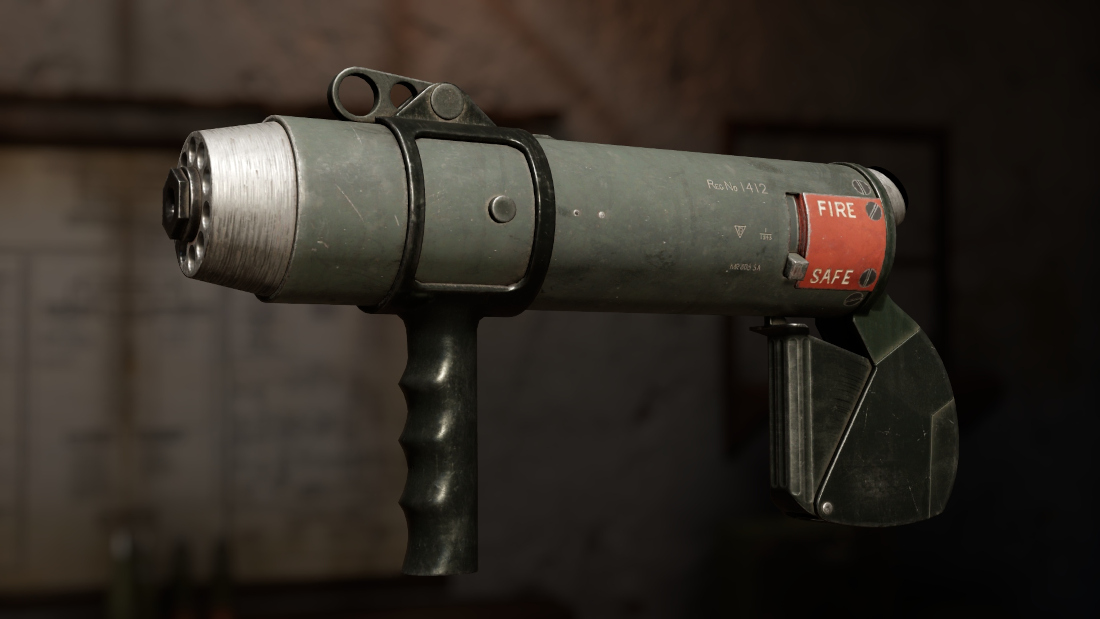 Four flametroopers at once with the unique, surprisingly compact Flamethrower portable No.2 Mk 1 models. It looks like a pistol, but in fact it’s just as long-range as its full-size, upscale counterparts.

Soldiers are also armed with M1941 semi-automatic rifles, the best in their category and superior to the M1 Garand in a number of ways. 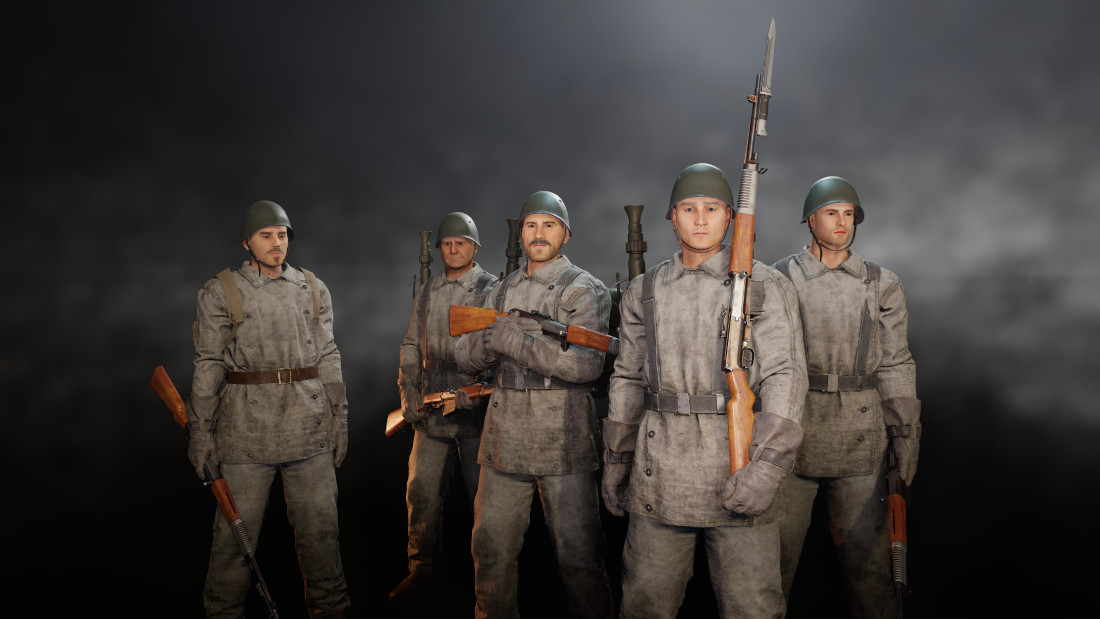 The Lanciafiamme Mod.35 is an Italian flamethrower with a more classic layout, but it also allows you to look like a soldier with a rifle. It has a range of up to 30 meters, which is excellent.

The squad’s small arms are the Czechoslovak ZH-29 semi-automatic. Fast reloads and high damage with each shot.

Both squads also include an experienced engineer.

INVASION OF NORMANDY: HERE IT COMES! 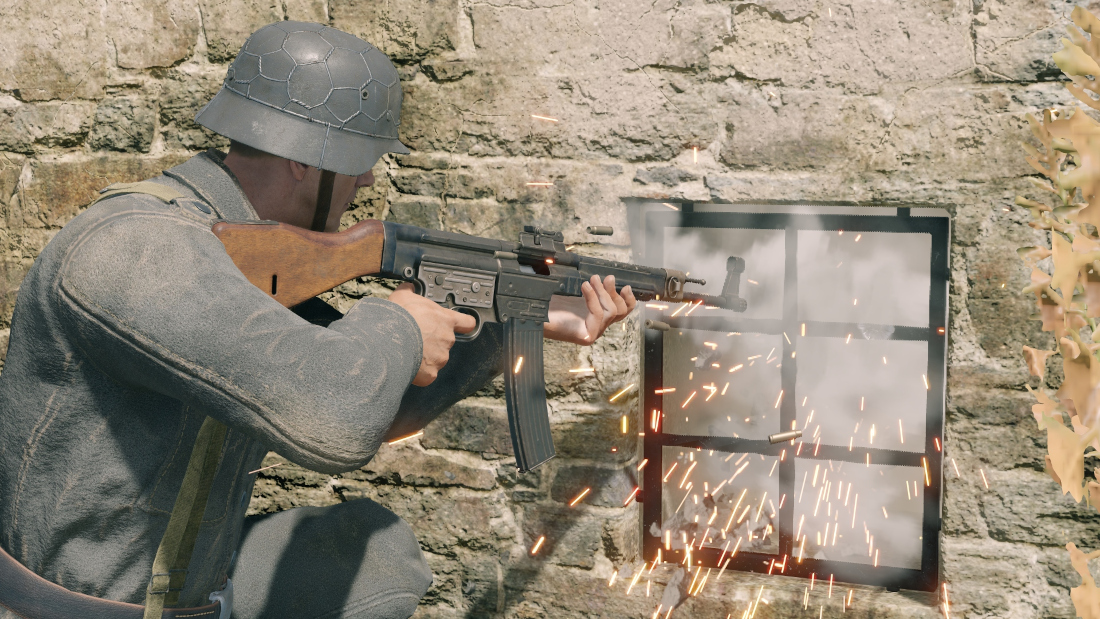 Assaulters for both sides, welcome to the supply line. Two very famous examples of assault weapons, looking at which one can surely argue which is preferable.

The Allies get the new Thompson M1928A1, a version with significant improvements, the most important of which is the compensator. You can count on excellent recoil control and the preserved virtues of the “Tommy” — high rate of fire, fire density and fast reloading.

The German army has its own feast in the trenches — the very real StG 44, with no prefixes attributing it to prototypes. Damage is higher than most submachine guns, a 30 round magazine, excellent accuracy and predictable performance if you learn to control the recoil, which is higher than of classic submachine guns. 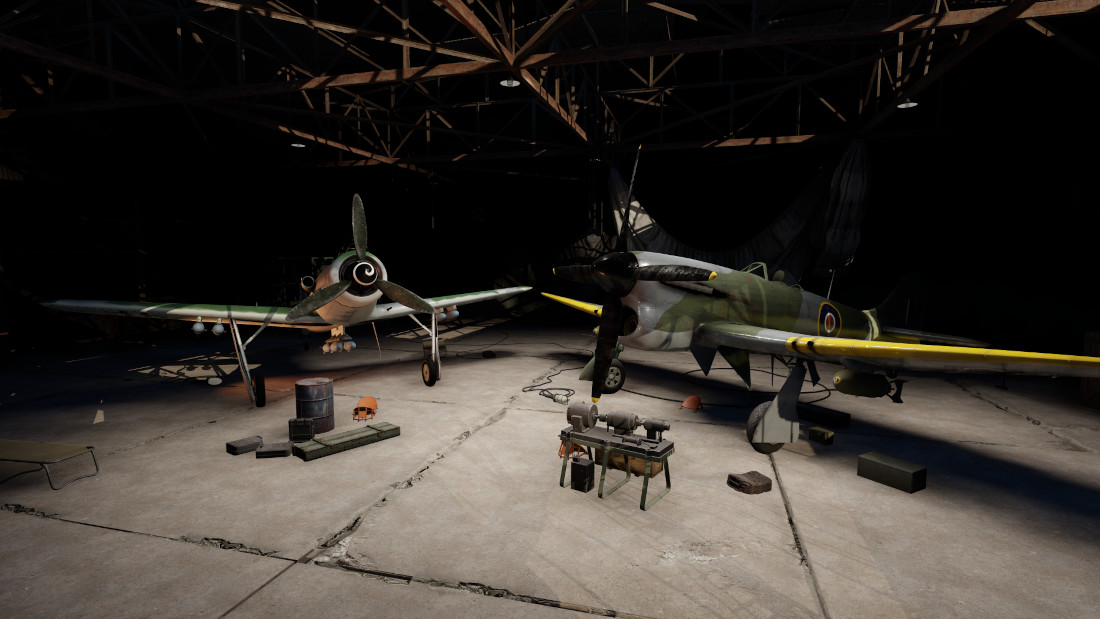 Fighter pilots. New high-altitude machines: the Tempest Mk.V for the Allies and the FW 190 D-9 for Germany. Both were fighters with excellent top speeds, powerful powerful armament, and suspended weapons of two 500 lbs. bombs on the Tempest and eight 50 kg bombs on the Focke-Wulf. 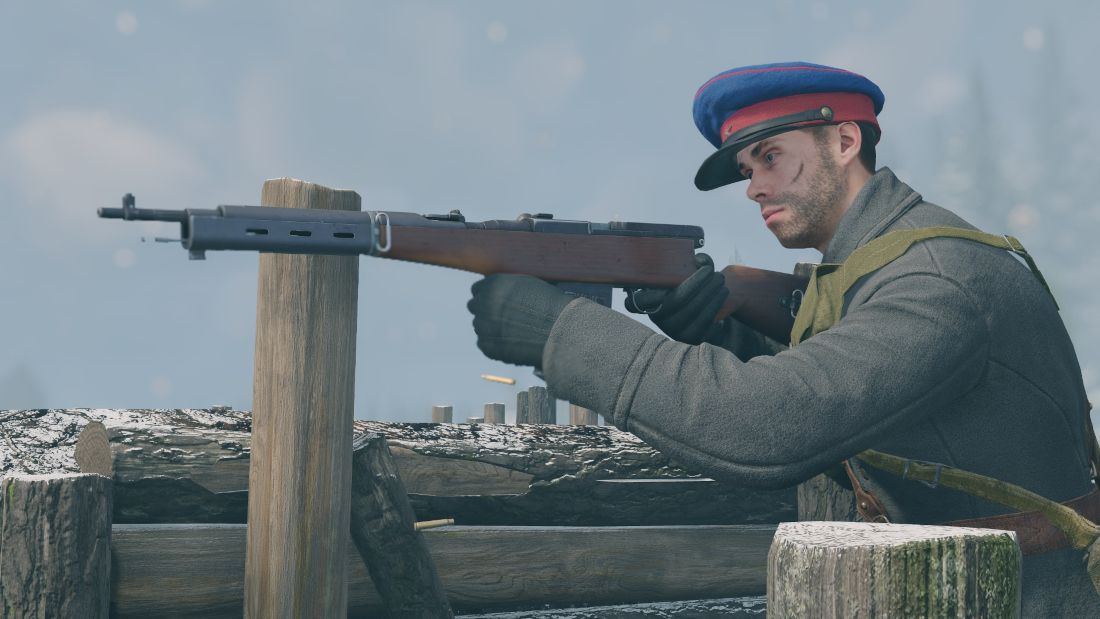 The Battle for Moscow, known to many for its love of the “one shot, one kill” doctrine, continues to stick with it. The Soviet army has a monster in its ranks, the Fedorov assault rifle, and this Soviet take on assault rifles is impressive: the damage per shot is on the heels of full-fledged semi-automatic rifles and is perfectly maintained even at an longer range, the rate of fire is not much lower than the early SMG, and only the high recoil will stop you at a fair price. Still you can handle it, but Fyodorov’s killing rate — you can’t.

The Germans answer with a classic: the MKb 42(H) — if you read about the StG in Normandy, it is just as fine and balanced an assault rifle, not going to extremes. Damage is lower than the Fedorov assault rifle, but noticeably higher than the conventional PP, not to mention the more gentle recoil. And the magazine is five rounds larger. 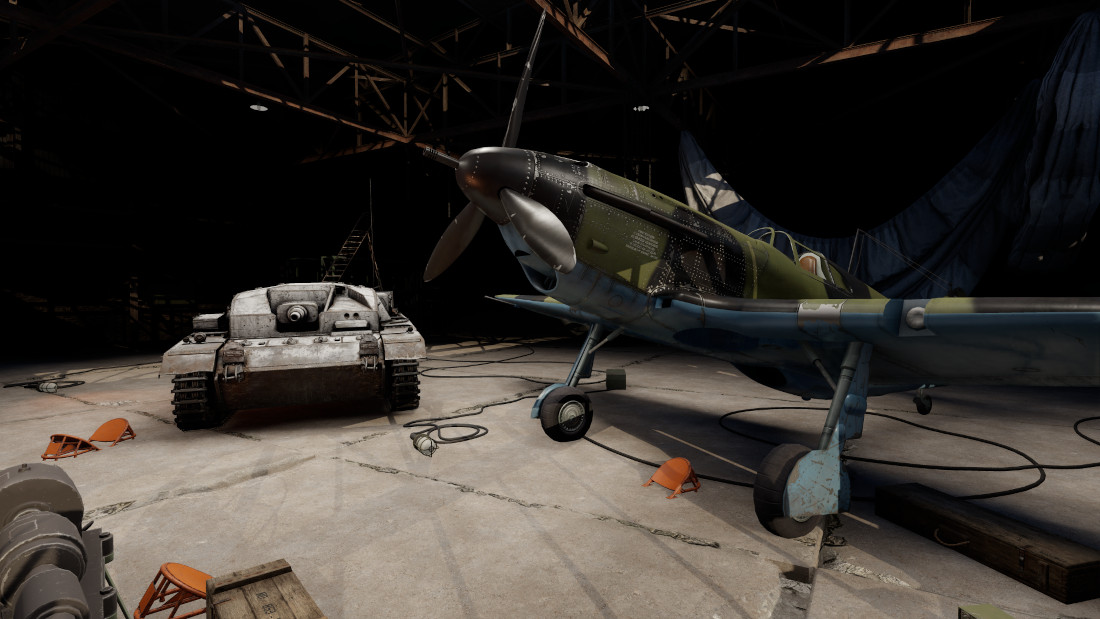 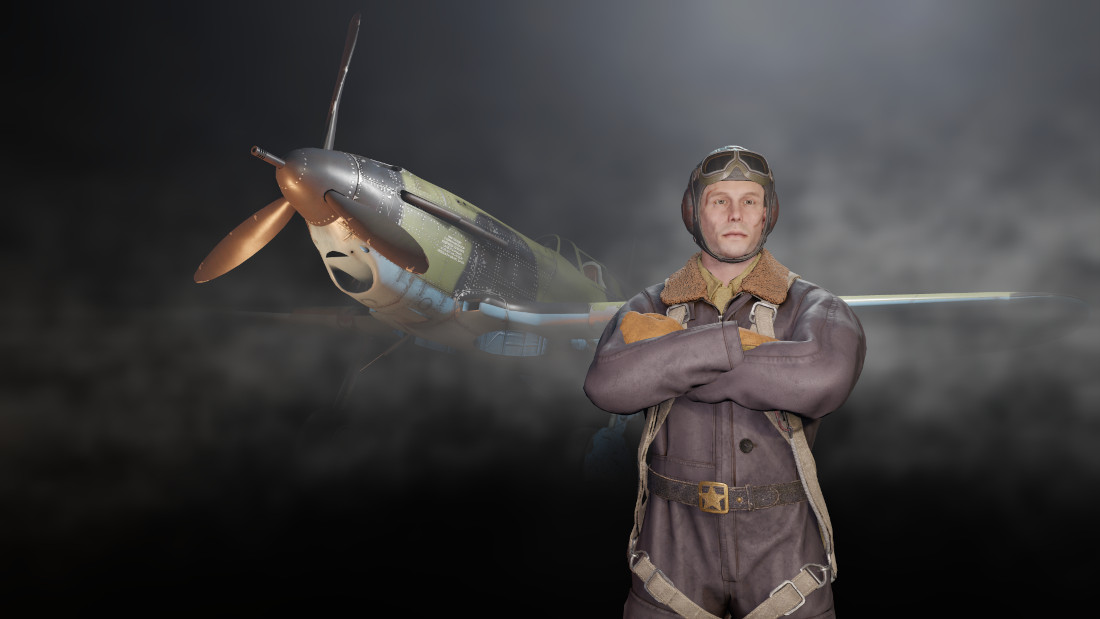 An experienced pilot with a high tolerance for overloads and fast recovery skills.

Aircraft: The LaGG-37, a machine for real snipers, armed with a powerful 37mm cannon. Not only can it deal with aircraft, but you can penetrate the top of most tanks near Moscow.

The vehicle crew is trained to effectively replace each other. If you lose the gunner, for example, you can easily replace him with a radio operator and use the bonus to reload the gun as quickly as possible. That’s useful!

50 mm of frontal armor is the best in Moscow at the moment, and the StuG III A has such protection. And then there’s the powerful 75mm cannon, equally effective against armored vehicles and infantry. 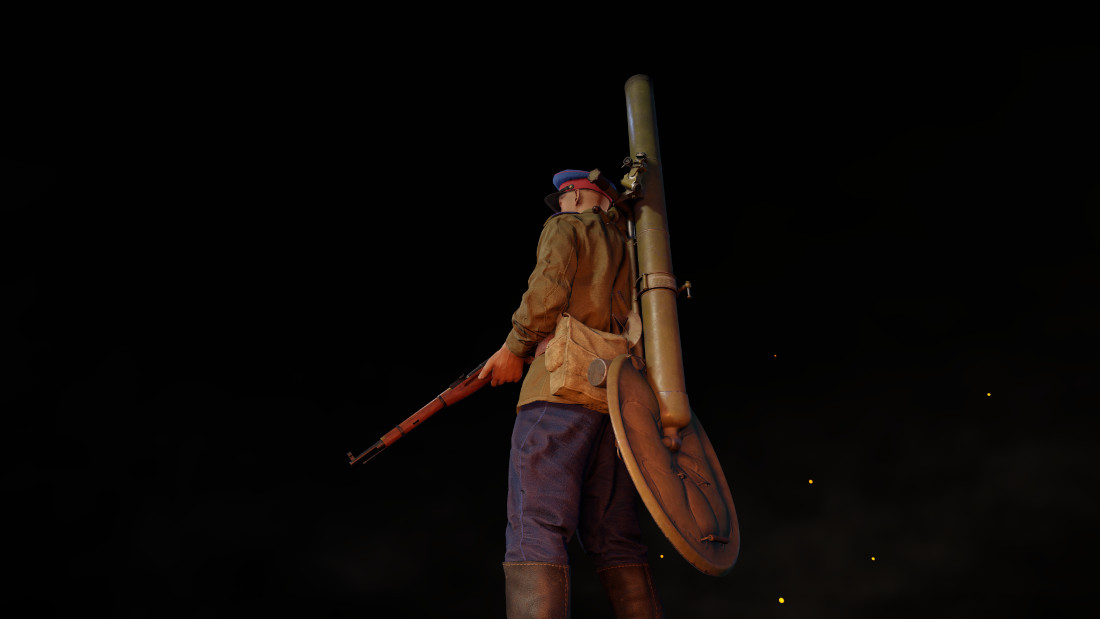 At level 36, Berlin has 80mm mortars (vs. the 50mm available previously). That’s eight powerful blasts wherever you want them to be. There is enough kill power in the 80mm grenades even against well-armored targets and the impact rate is higher than that in the 50mm versions. The USSR has the BM-41 and Germany has the Granatwerfer 42. You can give them out to any mortarmen squad, but it’s better to use experienced guys, which is what level 36 is all about.

Gunners. With their unique weapons. 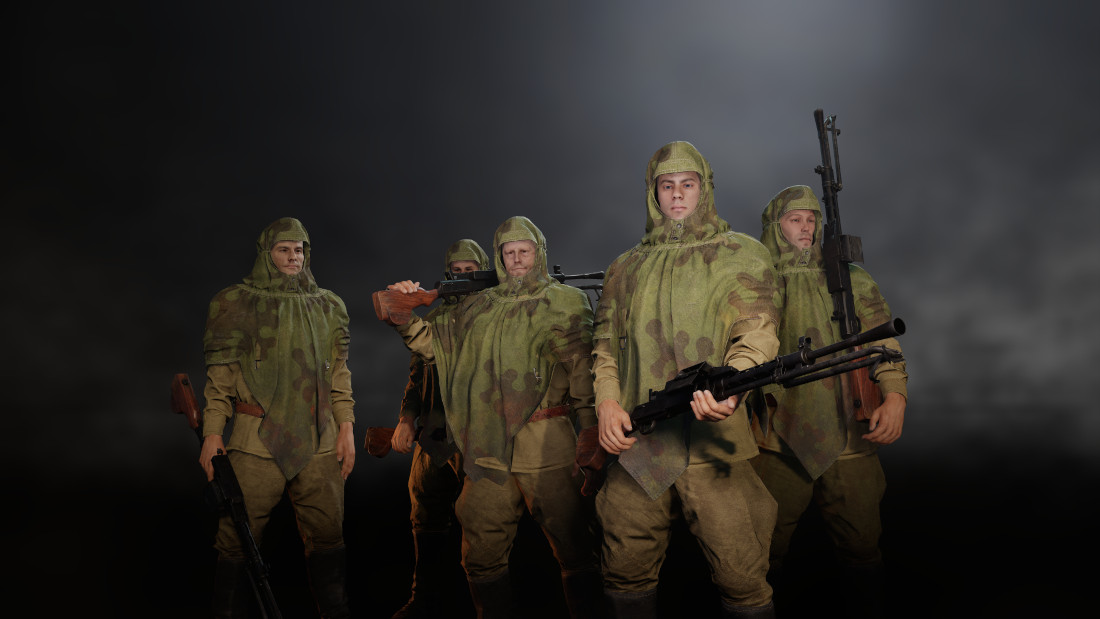 The squad has four gunners with recoil control abilities, as well as speeding up the use of first-aid kits and passive healing. Each soldier is protected by body armor, which somewhat reduces damage from light weapons.

The squad is armed with a modification to the popular Dyagterev machine gun of the Soviet army, but this is the belt-fed version. You’ll be able to fill up your enemies with a good hundred rounds before reloading! 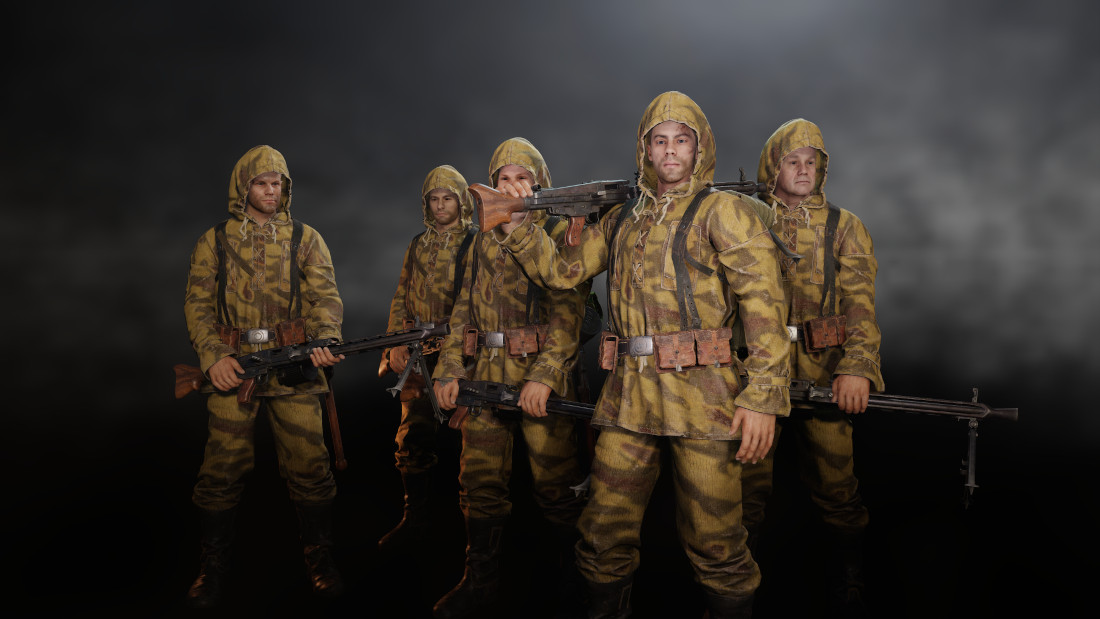 The German squad is not inferior in numbers or ability, and instead of restricting movement with armor, it relies on one of the latest Army Leibermuster camouflages, a memorable look.

In service with the German machine gunners, the MG 45 is a late-war modification with which they tried to cheapen production. It features a better rate of fire and faster reloading (which the MG 42 did not have at all).

Both squads also include an experienced engineer. 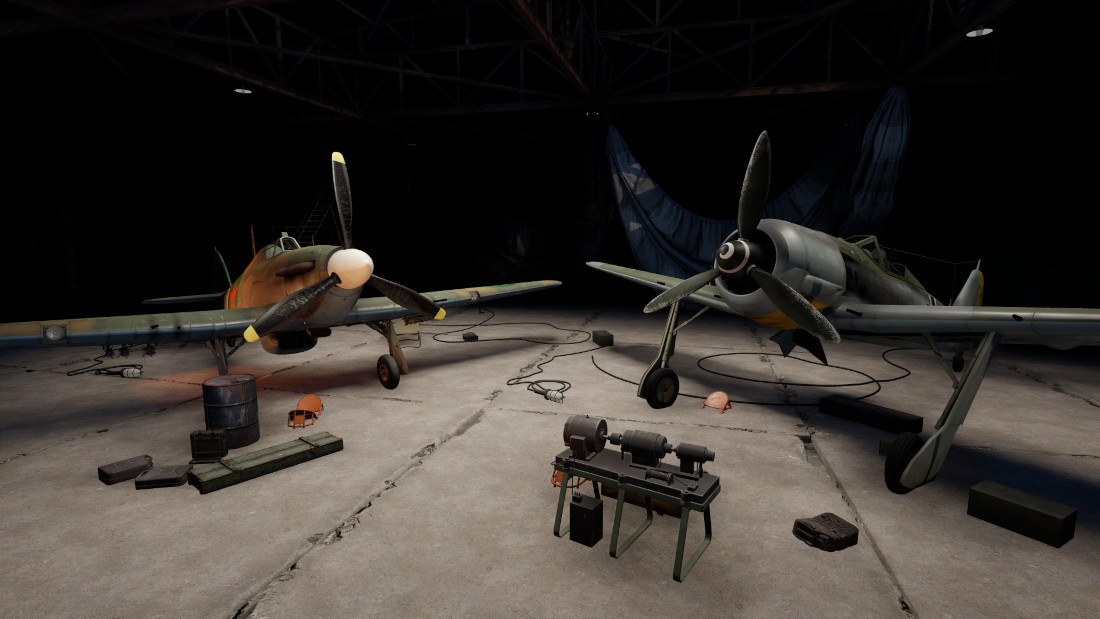 Serious machines fly in the sky over Stalingrad: they can handle not only air targets (including the annoying bomberscalled by radio operators), but also armored ground targets. The USSR has a Lend-Lease version of the British Hurricane Mk IIB fighter, rearmed with 20mm ShVAK guns and 12.7mm Soviet machine guns. Under the wings are six RS-82 missiles. The German FW 190 A-4 is presented without suspended armament, but carries four 20-mm guns and two machine guns — all this directional armament can and should be used to attack crowds of enemy infantry.

Medics! Jacks of all trades — to patch up your comrades and poke holes in your enemies. These are not only premium squads for leveling up fast, but also a very cool addition to the collection of unique soldiers of Stalingrad. And “unique” in this case is not just a pretty word.

The first female infantry squad! They saved lives, and did so quite skillfully, showing fortitude in the hell that was Stalingrad. Four sisters-in-arms, one of whom masterfully wielded not bandages, but an engineer’s hammer.

The squad is armed with the PPSh 2, a deep modernization of the original PPSh became lighter and more comfortable, but did not lose in killing power and very decent accuracy for such a rapid-fire submachine gun. 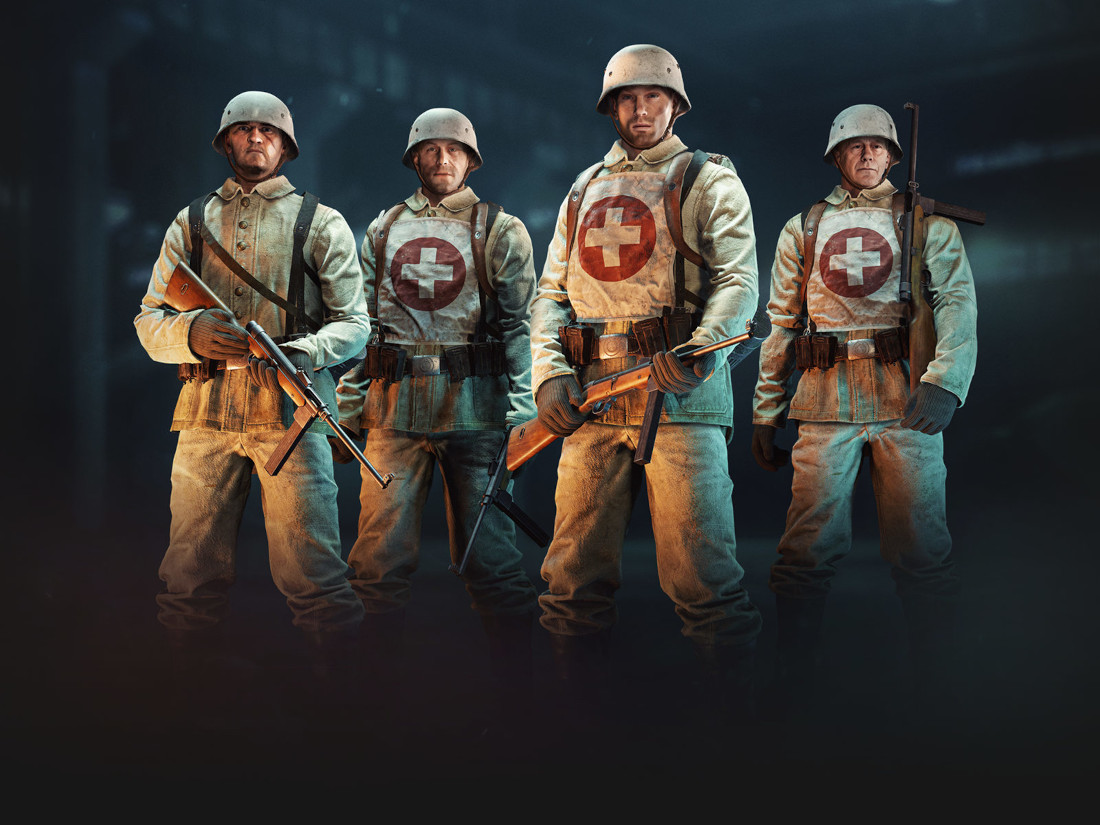 The German squad is strictly male, but this does not make it any less exciting. In addition to the very unusual uniform, on which you can see the medical cross even from the plane, these soldiers have a very interesting submachine gun!

It is a Romanian Orita M1941 submachine gun, which has amazingly low vertical and horizontal recoil. You can hit the target with single shots or continuous bursts with no problem. And when you run out of 32 rounds, you can reload in a couple of seconds.

Mildy disappointed that it’s only one level per campaign, but at least something is better than nothing!
Also glad to see some new flamethrowers, other than the usuals.

Is better like this, this mean they worked a lot in the pacific withaut rush for fill other campaigns

Which is why my disappointment is only mild ;).

I just need more Italian squads in my life

Appreciating the double dev-blog today! Must be drawing near to Pacific launch if news is releasing this fast.

Edit: Or, well rather the 14-day warning of it’s release date, anywho - as we know Console are yet to get access to pre-order.

sad that the italian stuff is paywalled

Ah ok understood that, but i like more this way withaut another tunisia fail for fill all campaigns

It was already predicted

Premium? That sucks. One of the most produced vehicles gets to be a premium

And that could have been a good booster for german tanks in moscow. Since they are very outgunned

Cool i guess, but not worth level 36.

I would have expected a full on Panzerschreck or something cooler

Can you at least introduce female soldiers for gold orders?

nahh put it in a premium squad.

As they say: Fucking disappointment, and in a way making it worse

Love the new stuff, but 50/50 premium levels is getting ridiculous, please give us more stuff to unlock and don’t paywall everything

Only positive additions are the rockets in Tunisia and the stug in Moscow.

“Germany gets a high visibility suit in Stalingrad!”
Who thought that was a good idea?

50 round container for MG45 still? LMFAO.

wow there are some really cool premiums squads this time around

i would buy almost all of them in an instant if they werent so absurdly expensive. but nah, probably wont buy any this season since they are all going to be 40-60 dollars each

This post was flagged by the community and is temporarily hidden.